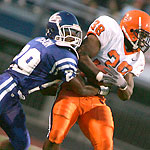 After a full century without facing each other, Buffalo and Syracuse broke an 101 year drought when they played at the Carrier Dome in 2000. Syracuse dominated the game 63-7. Four years later, for the first time in anyone's lifetime, Syracuse would play in Buffalo. The highly anticipated Syracuse game broke a 53-year attendance record (from the Civic Stadium days) as 29,013 fans packed UB stadium.

Syracuse came into the game following an embarresing 51-0 loss to Purdue, while Buffalo lost a heartbreaker to EMU 37-34. Buffalo came in ready to thrill the crowd and possibly shake up the hierarchy in the state with an upset victory. Bruce Jenner ran the American Flag around the track, Lee Ann Womack sung the National Anthem, and Jim Kelly served as honorary captain for the coin toss.

At kickoff, the building was electric. They say the defensive has the advantage in emotionally charged games, and it proved true. Syracuse had a great run back of the opening kickoff, but UB's defense held Syracuse to only a field goal. Later in the quarter, the UB defense grabbed an interception. The game was tied at 3, when J.J. Gibson recovered a fumble and returned it 57 yards for a touchdown and a 10-3 Buffalo lead.

In the second quarter, the game continued as a struggle for field position. After failing to move the ball deep in their own territory, Buffalo was forced to punt from their own end zone. Anthony Smith blocked and recoverd the ball to tie the game at 10. Buffalo was quickly forced to punt again after another failed drive and once again the punt was blocked by Smith. Syracuse returned the block to the one, and quickly punched in the go ahead touchdown. In under a minute the electricity was gone from the stadium.

Syracuse led 27-10 at the half and slowly choked the life out of the game. The crowd began to leave and the Division-1 atmosphere of the first quarter died into a "high school" atmosphere in the fourth. Syracuse went on to win 37-17. Despite the loss, the atmosphere of the game showed UB fans a glimpse of a full and raucous UB Stadium. UB fans would not have to wait another 53 years to experience it again, the record from the Syracuse game would be exceeded in 2006, and the atmosphere duplicated in the 2007, 2008 and 2009 seasons.