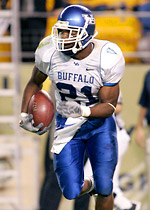 A kick return for a touchdown is an instant momentum swing. By definition, it is an opening salvo, or a swift counter of an opponents score. The following 3 moments provided that quick exciting momentum swing giving hope for a victory, although only one return resulted in a winning effort.

After a 3-1 1918 season, UB went 7-29-4 in six seasons before opening the 1925 season 3-2-1. The Bison lost their final two games to finish 3-4-1. UB struggled to create offense in 1925, scoring only 18 points in 8 games. In the '26 opener, Judd Rosengrant provided an offensive spark with an 100-yard kick return touchdown. Unfortunately, UB only scored one more time in the game, and the defense gave up 42 points. UB would go on to score only twice more all year; the Bison were shutout in the next 4 games and managed only a safety and a touchdown in their final two games.

UB opened the '56 season at Cortland. Paul Snyder scored the first touchdown of 1956 with a 2-yard run. Later in the first quarter, Kubisty hit Keats for a 17-yard touchdown pass and UB lead 13-0. Cortland climbed back into the game after two interceptions set Cortland up for 12 quick points. In the third quarter, Daniels one yard deep in the end zone, broke free for a touchdown to extend the UB lead. Kubisty threw for a second touchdown in the third quarter and Buffalo won 26-12. 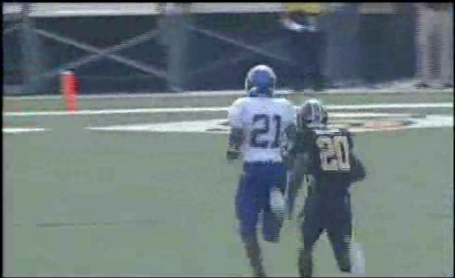 With 100 seconds remaining in the first quarter, the vaunted Mizzou offense already gained 140 yards and scored 10 points on two drives. The Bulls first two drives netted no points and only 15 yards. After Mizzou's second score, Ernest Jackson grabbed the kickoff at the 3 and veered right into the wedge. As Jackson hit the wedge, a large hole opened up, EJ cut back into the middle making one man miss and then turned on the afterburners, out running the Missouri tacklers for 70 yards until he coasted past the pylons.

The return gave Buffalo the momentum, until a 16 yard punt gave Missouri the ball at the 23. Jeremy Maclin scored from 16 yards out 2 plays later to give Missouri the 17-7 lead. Ernest Jackson responded again this time with a 32 yard touchdown reception from Drew Willy. At the half, Missouri lead 20-14. Down 13 early in the third, Ernest Jackson struck again with a 3 yard touchdown catch. Thanks to the effort of Jackson, UB was only 6 points behind 43 minutes into the game against the #5 team in the nation. Unfortunately, UB was unable to keep up. Missouri, who came into the game scoring 58 points on average, ended the game by scoring 15 unanswered points and UB fell 42-21.