I planned a different rant, but didnt finish it, so look forward to me complaining about "playing local talent" next week. Of course, now I have to make up something to rant about. Seeing as its Friday the 13th, I decided to write the horrifying scenarios of the 2012 season.

Georgia silently going crazy during the off-season starts with misdemeanors, then felonies, but on September 1st, (what's left of) the Georgia Bulldogs will be busting down the door with an axe screaming "here's Johnny" and will chase the Bulls down between the Hedges.

Like the creators of the Blair Witch Project, Morgan State is the amateur looking to make a big splash on a small budget. If Buffalo loses, I'll be crying and soooooo scared thinking about the horrors to come in the final 10 games of the season.

Bonus: This game wont be on real television, so shakey camera web streaming for all!

Kent State is all spare parts, mad science and flashes of golden lightning. On its own, not too scary, but all together it could be one scary monster in the MAC.

If it's anything like the game last year, it will be the only game that crawls out of the screen and kills you with boredom.

October 6th the Ohio game is...Drag Me to Hell 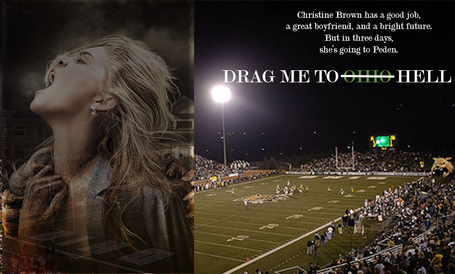 Peden is my vision of hell on earth.

With Harnish finally gone, there is no way we lose to NIU, unless their invisible man at QB bests us.

October 20th the Pitt game is...Night of the Living Dead

Pitt coaches keep dying, and springing back to life; also Tino Sunseri is as mobile as a zombie.

We raised David Fluellen as our own, but under the influence of Toledo, he may be evil incarnate.

Will they win by 50, lose by 20 or something in between, you never know with Miami, that's what makes them scary.

Bill Cubit, like Pamela Voorhees, haunts the MAC to avenge the beatings his son (Ryan) received.

If we fall asleep, they just might kill us.

Just chilling in a phone booth making a call HOLY $#!7 that bird just crashed into the booth, and another, oh crap are they attacking me? no wait yes, oh crap, what do I do, should I be scared? why why? Ok I'm gonna run for it...NOT MY EYES.

This has been an 100% accurate reenactment of watching every UB - Bowling Green match up.