Share All sharing options for: Know your Bulls: #88 Jake Reeder 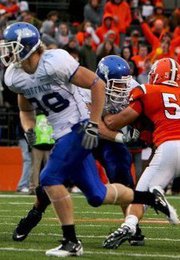 Know your Bulls is a countdown to the kick off. If will look at every single UB football player on the roster. When the players number matches the number of days remaining then it's his turn in the spotlight.

Jake Reeder was named first-team All-Mid-Penn as a junior and a senior, put up good numbers and was a great find for the Turner Gill's coaching staff.

In 2010, under first year coach Jeff Quinn, Reeder was beginning to find his place in UB's offense when, against Northern Illinois, he suffered a severe knee injury. The injury ended his 2010 season, and cost him the next year as he struggled to get back to form.

During his recovery Buffalo has seen several tight ends begin to assert themselves as potential starters. So Reeder is battling not only his injuries but also the other players who are securing their spots on the depth chart

He started to show that potential with five catches for 52 yards in 2010. If the team is moving towards receiving oriented tight ends Reeder should get a look. He had a good feel for coverages and showed good hands in 2010.