Share All sharing options for: Know your Bulls: #89 Matt Weiser 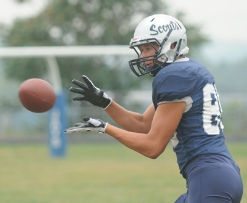 Know your Bulls is a countdown to the kick off. If will look at every single UB football player on the roster. When the players number matches the number of days remaining then it's his turn in the spotlight.

Spent Out with a Knee Injury

Matt Weiser came onto a team looking to find someone who fits into Jesse Rack's shoes. The change in coaching meant schematic changes, which themselves have been changed.

After pulling down 54 receptions for over 1,000 yards and 11 touchdowns Weiser was named second-team All-State selection and as the receiver of the year for both his league and county.

He looks to be a reliable receiver in the passing game and is going to fight for time against Alex Dennison. Weiser, and all the tight ends, will benefit from the changes being made under coach wood who has made the underneath passing game a much more pronounced part of the offense.