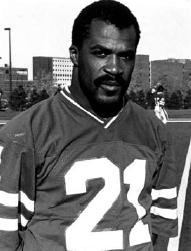 The 2-1 Bulls had a five-game winning streak against Rochester, winning the previous 2 years by a total of 63-14. In '86, Rochester was ready to end the streak. The only problem, they couldn't stop O.D. Underwood (Left, from UB Athletics). Underwood rushed for a school record 232 yards on 36 carries. Junior Quarterback Ken Crosta sealed the victory tossing two touchdown passes. Buffalo escaped with their sixth straight victory over Rochester 21-19, thanks to the breakout performance of Underwood. The single game rushing record stood for 5 years until it was broken by Alan Bell in 1991. It stands today as the third highest output, behind Bell, and Branden Oliver's 235 yards against Akron in 2011.

The 8-2 Bulls finished their season hosting Frostburg State of Maryland. O.D. Underwood broke onto the scene as one of the most dangerous weapons in the east. Against Frostburg, UB put the finishing touch on a great season in UB history winning 42-7 behind 3 touchdowns by Underwood. When the season was all over, Buffalo was 9-2 and Underwood became the greatest back in UB history.

He was second, now third, in UB history with 15 rushing touchdowns in 1986.

He still holds the record for attempts in a game, with 41 against Ithaca, breaking his own record of 36 in the Rochester game.

Underwood scored 3 touchdowns 3 times, against Canisius, Ithaca and Frostburg State, the only Bull back to score 3+ tds 3 times in a season.

Following their 9-2 season in 1986, UB returned All-American and Upstate Player of the Year Running Back O.D. Underwood. Naturally UB choose to start their '87 season with the ball in his hands. Underwood received the opening kickoff of 1987, and returned it for a 95 yard touchdown. Unfortunately, neither Underwood nor UB could return to their 1986 form, and UB finished the season 3-7.

After starting 1-5, UB had hope to finish 500. They defeated Brockport 28-7 and snuck by Alfred 21-20. The 3-5 Bulls would not win again, losing their final two matchups by a combined 7 points. The loss to Albany featured vintage O.D Underwood. Underwood had rushed for under 600 yards on the season, but rushed for 201 yards on 30 carries against Albany. Despite the drop off in production, Underwood's '87 campaign stands as the 10th best rushing season in UB history. Underwood left UB with the #1, #2 and #3 best games rushing the ball. The Albany game was #2, and 191 yards against Canisius in '86 was #3. Today, the Albany game is the 7th best individual rushing performance and the Canisius game is the 9th best.

For his career, Underwood finished:

#1 in rushing yards with 2,062, now 4th behind Starks, Swan and Bell. He also has the most yards per carry out of the top 4 backs in UB history.

#2 in Touchdowns with 23, now 5th in UB history behind Starks, Jones, Swan and Bell.