Note: This is no longer a rumor so I took it out of the title 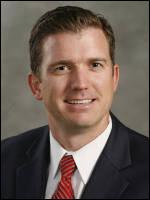 White has been at Ole' Miss since being hired as the Chief Development Officer in August 2009. Since December of 2010 he has been focused on the Revenue Team, comprised of the UMAA Foundation and the Ticket office. In the end he was responsible for all fund raising efforts as well as season ticket sales for Ole Miss Athletics.

One of his key initiatives was the Vaught Society, an institution which oversees major gift commitments of $5,000 or more annually. White restructured the society and since its launch December 31, 2009, donors joining the Vaught Society have committed over $11 million to help fund new facilities.

White began his professional career at Ohio University, where he served as Director of Basketball Operations for the Bobcats before becoming an Assistant Men's Basketball Coach.

He also spend time at Northern Illinois. From 2006-07 white was Assistant Athletics Director for Development for NIU. He lead the Huskie Athletic Scholarship Fund to a record year with over 30% growth in membership.

White Replaces Warde Manuel who brought Buffalo to an unprecedented level of success as the football team participated in the 2009 International Bowl and the men's basketball team made postseason appearances in three of the past seven years. He also improved the Olympic sports with three-straight Dad Vail Regatta titles by the rowing team, six wrestlers earning spots at the 2011 NCAA Championship and the women's tennis team making an appearance in the 2008 NCAA tournament.

Manual also set up UB athletes for success in the classroom. When Manuel arrived at UB, there were four programs - football, men's basketball, wrestling, and baseball - that fell far below the NCAA Academic Progress Rate (APR) cut score of 925. With a focused academic plan, all four teams posted a four-year APR rate above the cut score and at the end of 2009-10, 10 of UB's 20 sports had scores of 975 or above.

Whites first task will be deciding the fate of Linda Hill-MacDonald, UB's embattled women's basketball coach. The next could be picking the proper length for coach Quinn's leash.