Share All sharing options for: 99 for 99 - #97: Gerry Philbin Gets Double-Drafted, Wins the Super Bowl 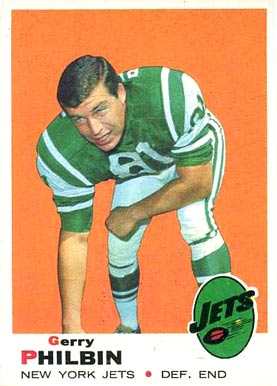 After a great UB career which saw Philbin become a 2nd team All-American, a Little All-American and an Academic All-American, it was time for Gerry to go pro. He was so good he was not only drafted once, he was drafted twice!

Detroit at the time had a reputation for losing draft picks to the AFL, as they offered contracts under market value. Philbin became the 10th draft pick in 4 years to go to the AFL rather than accept a contract with the Lions.

Fortunately Philbin signed with the Jets as 6 years later they made history. Philbin was a starting defensive end on the 1969 AFL Championship team that defeated the Oakland Raiders 27-23 at Shea Stadium and earned the right to compete in Super Bowl III. Super Bowl III in Miami famously featured the Joe Namath Guarantee, but the real story was Philbin and the Jets defense that held the heavily favored colts to only 7 points. One of the defensive coaches on the Jets was Buddy Ryan, who helped develop Philbin at UB.