Share All sharing options for: Talking Bull: Hustle Belt is taken over by Nerds... Hilarity ensues!

Among the cadre of Writers that Matt Susman controls over at the MACropolis are Carter Adler (who also runs Eagle Totem) and Ben Miraski. They each did their own number crunching and each agrees that it's not looking good for the Bulls. Expect Akron or Ohio, if the geeks are right.

The Men's MAC Tournament: What 28,000 Games Say About Who Will Win - Hustle Belt
Over the past 10 years, I have on and off ran a computer basketball ranking system known as the MRI. During that time, I have tracked the results of some ridiculous number of games, and then how well teams did based on their ratings. 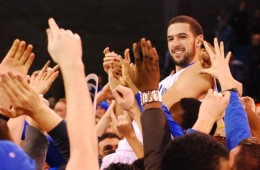 This guy mock your meaningless math:

Mitchell Watt was all the rage this weekend. Our own Hoops Czar put up a post singing his praises (well not literally singing, I would pay for that). Watt also got some great press from the Buffalo News, the Spectrum, and Queen City Sports..

Say it with me:

Is Buffalo Finally Getting Behind UB Basketball?
Buffalo is starting to appreciate this Bulls team. The crowds are slowly getting larger, the students are becoming more rabid, and the team on the court is getting consistently better.

Watt a Season! - Sports - The Spectrum - University at Buffalo
There were M-V-P chants that serenaded from every corner of Alumni Arena Saturday. They were quiet at first. But with every rebound, every free throw attempt and every basket, those chants grew louder, and louder, until the end of the game when the crowd carried the senior leader off the court in exhilaration.

March Madness in full swing at UB - UB Men's Basketball - The Buffalo News
The scene was something one might expect to see if UB ever breaks through and wins the Mid-American Conference Tournament. The students flooded the floor. Mitchell Watt accepted a ride through the mosh pit while serenaded with chants of "MVP." His teammates lingered, accepting congratulations from the masses that had collected on the Alumni Arena hardwood.

Bulls Break Records But Fall Short of Title - Sports - The Spectrum - University at Buffalo
Buffalo went into the final day of the meet trailing by 11 points, and took the lead after a strong performance in the 200-yard backstroke. Junior Matt Schwippert placed second, while freshman Travis Bohn and sophomore Phil Aronica placed fifth and sixth respectively. The Bulls held that lead until the 3-meter dive, an event that Eastern Michigan dominated. Eastern Michigan placed six divers in the top 16 of that event and took a commanding lead going into the final event. Although Buffalo won the final event of the meet – the 400-yard freestyle relay – with a record time, it could not catch the Eagles.

Great season by the guys and the program is getting better by the year.

Big East Expansion: Temple Denies Agreement To Move - SBNation.com
Steady inhabitants of the bottom of the standings, the Owls were kicked out of the Big East in 2004. The program has since turned around in the MAC and joining the Big East would fill the void created by West Virginia's departure to the Big 12.

Nos a lot of people have stuck their neck out saying this is a done deal, either they or Temple are lying. I could understand why anyone dealing with the Big East might want to keep quiet. While it seems at least a football only invite is a no brainer we are talking about a conference leadership which, well, has no brains.

Because it's really a problem worthy of his attention...

Barack Obama Talks To Bill Simmons About College Football Playoffs, Of Course - From Our Editors - SBNation.com
Just act natural, and we'll all get through this. Yes, President Barack Obama appeared on the BS Report with Bill Simmons, all recorded at the White House. Don't even flinch. Don't even think about what you've just read. Just proceed.