Danny, You had me at Hello!

Danny White blitzes the Buffalo media with his big plans

Share All sharing options for: Danny, You had me at Hello!

I was as upset about the Jeff Quinn extension as just about anyone out there. I made camp among those scratching their head at the premature move.

Eventually, though, there comes a time when one should silence their inner crazy fan and examine the body of work put forth by the person who made such a decision. In this case the decision maker was UB Athletic Director Danny White.

White has been blitzing the media over the past couple of weeks talking about everything from new programs, like Hockey, to faculties, to the motivation behind the Quinn extensions.

So far White is saying all the right things and has many fans more excited about the future of this program than they have been since 2008. When White says something fans don't like, which is pretty often, he usually has a very straight forward reason and lays it out plainly for the world to see. It's really quite refreshing.

White has basically said unless it starts raining money UB hockey fans will have to be content with the Schools DI and DIII ACHA teams... (paging Jeremy Jacobs, UB Alumni and Boston Bruins owner Jeremy Jacobs)

Now we here at Bull Run are not happy that Hockey is not even on the back burner. But.....

White also went on to say that he understands the culture of Buffalo and the local desire for a UB Brand Hockey. His reason behind not pursuing a NCAA hockey team is because he can't build a large regional brand with Hockey. It's hard to do that even with Basketball.

The Buffalo brand has to be sold by football, it's the only reason that Boise is on the map. Football long ago passed baseball as our national pastime and so long as our program is not successful in selling other sports there is no reason to expand our portfolio.

On a side note this was what the last class of Buffalo scholarship hockey players were told. "We're dropping scholarship hockey so we can sell football". They understood at the time but 20 years later you have to ask... Was it worth it?

Spend enough time on fan drive sites like blogs and message boards and you'll see no matter how great the coaches resume there are people who rip their idiosyncrasies. I've seen Alabama fans melt down against Saban.. If Nick Saban has not earned a free pass from his fan base then nobody ever will.

When Jeff Quinn was granted an extension a good portion of the fan base, including your truly, went over the edge. Nine wins in three years is hardly "mission accomplished" and we here at Bull Run were not happy about that. But...

White sums it up pretty well.

"And what I noticed is a lot of rhetoric about job security. I don’t think that’s healthy for a program. I think it’s a negative thing for recruiting. I think it’s a negative thing for managing our current roster, and for us trying to build a vision with this community. So I felt like it needed to be addressed and I felt we needed to put some certainty on where we’re going as a program." -- Danny White to the Buffalo News

I actually buy this, I just hope that the exit clause for UB on this extension is far more friendly than the original deal.

Half way through the season I did receive an email from someone looking at the program asking me my thoughts on Quinn's future.

As a blogger that's not a fun place to be, I love email tips from people but hate when someone wants me to speculate on what the department will do so they can make a decision. Bull Run is not attached to the department and ever since the change of leadership I don't have any sources within the walls.

That being said my response was that Quinn had made it by the hardest part of the schedule and would win at least three of his final four games, that would likely keep him around.

White's answer seems to address concerns that donor's and potential players might have about the stability of the program. Like him or not Jeff Quinn jut put up the fourth best season UB has had since it joined the MAC 13 years ago. Pretty much everyone agrees he had earned 2013 it was only the extension that seemed odd.

UB has all the institutional tools to be the next big thing. The school is an AAU member, has a larger endowment than any public school in the North East and is itself growing by leaps and bounds beyond it's already impressive academic footprint.

White said he was not looking to move conferences. The implication was that the Director was putting zero effort into bettering UB's position in the world. We here at Bull Run did not like that. But...

White said the temptation to try and leverage UB the school has to site behind the benefits of that the MAC's stability and the challenges that UB has had breaking through as a conference power.

And he is right!

Buffalo not NIU, Toledo, or Ohio. Not stringing together winning seasons, going to bowls, not making a name in the AP polls. UB has tremendous opportunities to climb mountains in the MAC, a conference with two ranked teams and seven squads in bowl games.

This is where white really has me excited. I know Warde inherited a program which was far worse off but it has to be plainly said that he never could commit to a road map of major stadium improvements. White has not given us any pretty drawings of what things will look like but he has been very forward with his timeline and plan for getting UB to a place where our facilities are a selling point.

The Current stadium is awful 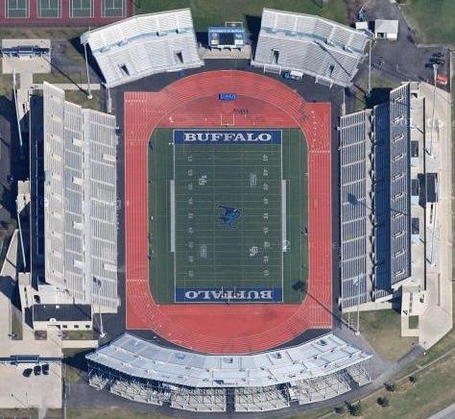 It was built as a 21 thousand seat stadium for the world university games. The bleachers in the north and south endzones were added later to meet the requirements for the MAC. They bring the stadium to about 31,000. The north bleachers are typically covered bringing the current capacity back down to 29,000.

The stadium seats are way to far removed from the field. It's better to sit in the upper rows if you want a view of the game because if you have to look across eight lanes of track you might as well be high up.

The south bleachers are next to useless they are so far away.

The stadium, decent weight rooms, and nice conference rooms, are the whole of our facilities. The long awaited for field house has been on an indefinite "some day" status since about 2006. 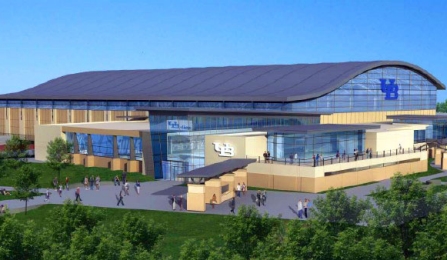 But this still leaves the stadium as someplace to have a ho-hum game day. White has hinted at what he plans to do and he said the magic words. Get the fans closer and add luxury sweets to generate revenue towards fixing the stadium.

The luxury boxes will go on the east grandstands, presumably in the 200's, and are phase one. Once they are in place, and hopefully generating revenue, UB can finance other improvements, including "getting fans closer"

There is only one way, I can think of, to get the fans closer. remove the track and lower the field 10-15 feet. The fill in a new section below the current 100's. The south bleachers, if you keep them, may be salvageable if you bring them in closer.

The loss of two thousand seats in the north bleachers will be more than compensated for with the additional sections to the grandstands which could add as many as six thousand seats taking the capacity of the new stadium, including the south bleachers, to 35,000.

Or you scrap the south bleachers and build a fixed 4,000 seat section connecting east and west making a "U" stadium with the fitness center and field house on the north side. 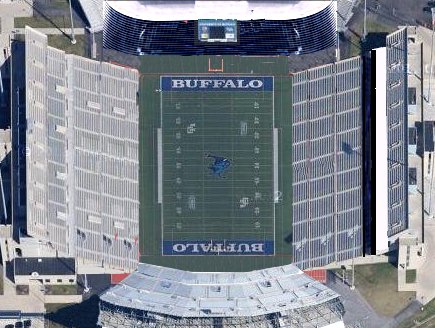 With boxes in the current 200 section, would be the 300's of the "new stadium" the field house in the north and the south bleachers brought in closer.

While white has not given a year for removing the track he has mention. He's also given a time line on the north field house. Four years according to plan.

It's either very impressive or fool hearty to put a date on something like the field house when you've been on the job less than a year. It's also pretty nervy to extend a coach with nine wins in three years of playing. By doing Both Danny white has handed UB fans a stick by which to measure him by.

If fans complain about the progress of the department it will be against the measure stick White himself has created. Handing a fanbase, who are fickle by their very nature, such a stick is a sign that white is pretty confident with his ability to get the big projects done.