I am all for expansion of the MAC. I like the MAC, but I'll never truly love the Ohio-centric conference. I wanted to be part of the old Big East, or the new ACC, but that is no longer possible, and I want nothing to do with the new Big East. As a result the MAC is basically the only sensible conference for Buffalo football. I ran some numbers, and found 3 teams that I'd like to add to the MAC to improve the conference, and my interest in the conference.

I reviewed over 30 schools, eliminated all the private schools, and found programs that fit the profile of the current MAC schools, without duplicating media markets. Actual skill in football and basketball was noted but not an important aspect.

School's I do not want:

The Divisions would be:

With Mason, SIU-E & Stony Brook, the MAC would add 27,537,203 potential eyeballs to our conference. This will help the MAC as they negotiate their next television deal.

It would strengthen Basketball (in the MAC East) using the average RPI over the past 8 years:

Mason would be the #3 hoops team in the MAC,
UMass would be #6,
SB would be #12, and
SIU-Edwardsville would be the worst, although they were ranked ahead of NIU in 2012.

In Football, well Mason and SIU-E do not play football. If they field a team it would take them a few years to get up to speed, which would help the MAC, as football is constructed today, cupcakes get you ranked, rankings get you prestige, prestige gets you money. Check NIU's schedule and tell me I'm wrong. Watering down the MAC would only increase the profile of the current MAC programs.

All three of the new teams have proximity to NFL stadiums, which would help MAC schools in recruiting. Edwardsville is 30 minutes from the Edward Jones Dome, home of the St. Louis Rams, George Mason is close to FedEx Field in Maryland and Stony Brook is relatively close to Met Life Stadium in New Jersey.

Yes I know there are philosophical issues involved with 3 state schools playing football in a different state than the campus. Mason of Virginia playing at Fed Ex in Maryland, SIU in Illinois playing in Missouri, and Stony Brook of New York playing in New Jersey. My answer to that is: Cash Rules Everything Around Me, Cream get the money, dolla, dolla bills ya'll. For the right price no one will care about the little inconvenience of not playing in state. This arrangement would help the MAC earn more money, help the schools galvanize their alumni base, and earn more money and would earn money for the cities, counties and states that funded the NFL stadiums. Plus UMass at Gillette is technically in-state, but is a further commute than any of the other 3 campus to NFL stadium commutes. 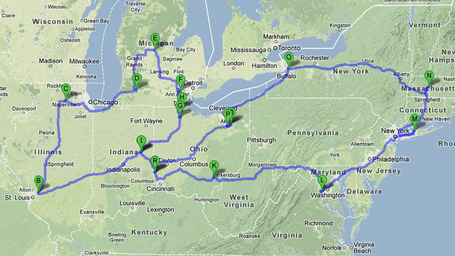 This model provides room for the MAC to grow as a regional conference, but with the demographics to one day compete with the Big 4 conferences economically.

What do you think about adding Stony, Mason and Edwardsville?