Who knew the Mayans were Big East fans!

Who knew the Mayans were Big East fans!

Share All sharing options for: Who knew the Mayans were Big East fans!

Well twice in the past year we've asked if UB Fans wanted in on some of that Big East Action. Conrad asked first and then II asked right after Tulane joined.

given the developments of this week I hardly think its worth asking anymore. The Big East, as we know it, is dead.

As Big East Catholic schools prepare to break away, key issues emerge - College Basketball - Pete Thamel - SI.com
The departure of the seven Catholic Big East basketball schools from the league appears to be inching toward inevitability. "I think it's certain the seven schools will leave, barring some substantial financial or legal impediment," a source with direct knowledge of the situation told SI.com.

THE FOLLOWING ARE THE STEPS IN THE PROCESS OF THE WAKE:

1. Neighbors experienced in laying out the body gather at the house of the diseased.

By Neighbors of course we mean sports journalist. So ESPN, CBS, and FOX journalist have to decent on providence Rhode Island to prepare the body.

Fortunatly for the Big East family they just imported a green wave into their conference. The good folks from Tulane need to pop by and wash over the body. 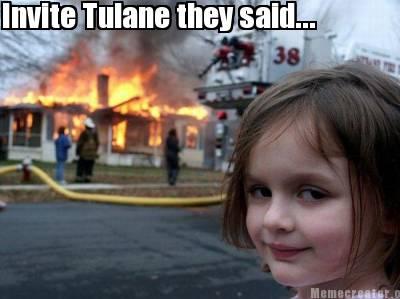 3. The body is dressed

The one thing about the Big East is there are a lot of banners we can use to dress the body. 11 NCAA championships, and 44 final four appearances. More than enough material to wrap the body.

4. A bed is prepared for the body.

Right now Conference USA, the MAC, and the Mountain West are getting resting spots ready for the Big East schools. It's possible that they band together to make a new conference but it's looking more and more that the money is not there to support a San Diego to Connecticut conference at the mid major level.

5. The body has to be clean shaven before the Banners are put on.

The Big East has been getting shaved since the ACC first broke out their barber kit almost a decade ago. With the "Catholic Seven" leaving the conference they are now as clean shaven as they can be.

6. A crucifix is placed on the breast and rosary beads are put in the fingers.

This might be a problem. While I'm sure UConn, USF, and Cincinnati are ready to covert to mother Rome right now all the tools of Catholic Practice are gone

7. Sheets are hung over the bed and along two or three sides.

Well the Big East is now in it's bed, dressed, and cleaned shave. we will hang the extra banners around the bed

8. Candles are lighted in candlesticks near the remains.

Will the last school leaving please put out the lights!