The Powder Horn is back in Amherst, New York!

Share All sharing options for: The Postgame Meal: UB 29, UMass 19 - Just Go With It

The Postgame Meal wraps up the game and gets you ready for next week. The football season ends on Friday. We can go out with a bang, 4 straight victories.

For the first time in 42 years, the Powder Horn returns to Buffalo, but first we add our 5th jeweled UB: 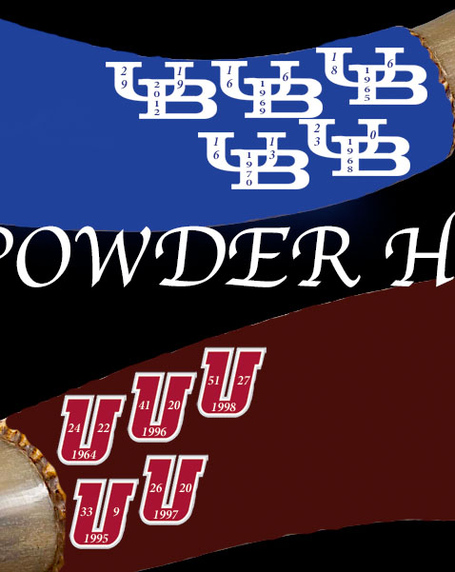 A weird game in a weird season. Preseason, consensus was we needed to see 4 wins. We have 4 wins, but I don't think we expected to get them this way. UB has looked like the worst team in football at times, and they have looked like a team primed to win the MAC East at other times.

When the firm of BO, Alex and Alex splintered and led to the emergence of Joe "Bi-Wan" Licata and various other previously unknown athletes, we just went with it.

When Quinn found himself down 19-14 going into the 4th quarter, and instead of going trick play or 5-wide, he swallowed his BCS Bowl inflated pride and handed the ball off 17 times for 74 yards choking the life out of UMass, we just went with it. We didn't mock his use of a fullback as a feature back, we didn't ask "where was this at Ohio?" We just went with it. CHART TIME!

Celebration Music: One, Two, Three wins, including a "Step-By-Step" win over the New Kids on the Block, Three Songs!

Hydration: Sack, if you're fancy, or Quarterback Sack, if you're not. Either way have 8 of them, one for each sack the Bulls had when Lukewarm-Lou Tepid was told for the first time that we are allowed to send more than 3 rushers on 3rd down.

Nutritionalism: Oregon State went In-And-Out and they were motivated into a win streak. I prefer Ted's. Grab a Jumbo Burger and a Loganberry Shake, enjoy the night and if we win next week, we'll go again! The Ted's streak rolls on! We Want 4! We Want 4!

Factors to decide the game.

UMass will be the least effective offense we face all year. They average 5 yards per pass attempt We held them to 5.4 and 3 yards per rush attempt, we held them to 2.8 both figures last in the MAC. They threw for 373 yards and 4 TDs against Ohio, but later threw for 33 yards and 4 ints against Bowling Green. Both games were at home, and both ended as UMass losses.

Despite their shortcomings in the passing game, it is the strength of the UMass offense. In their last five games, they have managed one 100-yard rushing effort, and have exceeded 3 yards per carry once. 215 passing yards vs 61 rushing yards.

Buffalo has played their best against pass first offenses. If UMass cannot run to break UB out of the 3 man rush, then UB should be able to drop 8 men and shut down the pass. They did this, and was able to get pressure with 3 men. When they sent more than 3, it was troublesome for UMass.

UMass has also thrown 22 interceptions, and Buffalo has recently discovered the art of the defensive interception. UB snagged 2 ints, 1 by Okoye Houston, 1 by Najja Johnson.

Again we should have no problem with moving the ball against UMass. They are at or near the bottom of the MAC against the run, against the pass and in points allowed. If we have a running back, he should have a solid day and the maturation of Licata should continue Saturday.

Murie and Jean combined to average 4.9 yards per carry gaining 163 yards on 33 carries. Imagine what Campbell or BO would have done to UMass. Licata was solid, 18 for 30, 2 TDs, 226 yards. The passing offense continues to look competent and easy schedule or not, we can never go back to Zordich.

Alan Williams: Is listed at Running Back, but he has only one rushing attempt all year. I fear his receiving skills, 28 receptions for 317 yards and 4 touchdowns. He has been a Dri Archer like home run hitter in two games: 7 receptions for 127 and 3 TDs against Ohio and 6 receptions for 86 and a TD against Akron. When Williams is on, UMass competes.

Williams had a solid day, 7 receptions for 62 yards, but he never hit the home run, his longest reception of the day was 15 yards.

Willie Moseley: In a defensive scheme that drops 8-9 in coverage on most passing downs, we still require our Linebackers to cover the slot and backs. It was problematic on 3rd downs against UConn and Kent State, but the LB Unit has improved, culminating with a Moseley interception in coverage last week. If Moseley can shut down Williams, it should be a good day for the UB defense.

Moseley was maybe the one defender who did not have an outstanding night, 3 tackles and a half sack. Today belonged to Khalil Mack, Steven Means and Colby Way who combined for 33 tackles, 7 sacks and Mack added 2 forced fumbles.

Buffalo has the advantage, if every red zone attempt should end in 7 points, Buffalo has scored 59% of possible points, to UMass' 48%.

And while Buffalo has allowed red zone points 83% of the time, they have held teams to only 68% of possible points, holding teams to field goals (as a result of Lou Tepid's bend but don't break defense). UMass has not been as successful in not breaking, allowing 82% of available points.

If the pattern continues, and UB can hold UMass to field goals while the UMass defense yields Touchdowns, UB will win.

UMass has been outscored 80-19 in first quarters this year and 145-42 in 2nd quarters. At halftime, the average UMass score is 23-6. Last week, UMass took a 15 point lead into the half and held on to win. Buffalo's job is to jump out to a big lead, and then coast in for the victory, or really rub it in to make your record look better...standard Jeff Quinn vs FCS operating procedure.

Sadly down 13-0 at the half, we were able to take the lead then strangle the life out of the game. We played like this against UConn and Pitt, and did not survive, we are lucky we put our worst 1st half effort in a month against the easiest team on our schedule.

11) Game Score brought to you by: Science

I had UB winning 33-13, we won 29-19...UB under acheived and UMass came ready to compete, but at the end of the day the talent gap provee to be the difference.