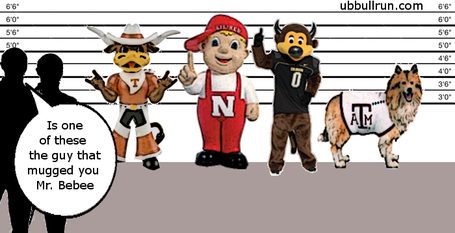 Fake Dan Beebe Unleashes A Twitter Rant For The Ages - From Our Editors - SBNation.com
If there was one great thing about the ongoing conference realignment saga, it was @DanBeebe, the Twitter parody account that seemed so much like the real thing, we began to wonder if the Big 12 commissioner was actually behind it. And on Thursday, the moment we've all been waiting for arrived: The real Dan Beebe tendered his forced resignation, and @DanBeebe went off. It was the most spectacular of finales.

Don't we know how that feels:

When Jeff Quinn came on board Zach Maynard got a bad vibe, and left. At NC State the Coach got a bad vibe about their QB and kicked him to the curb. The results for each coach are same.

Morning Tailgate: Defending N.C. State Coach Tom O'Brien (Sort Of) - SBNation.com
Tom O'Brien's decision to push Russell Wilson toward the exits at N.C. State was logical and defensible. And it might cost him his job.

For UB's Mack, the beat goes on - UB Football - The Buffalo News
Khalil Mack shuffled into UB Stadium early one midweek afternoon looking still deep in sleep. His eyelids were heavy, his gait slack. It was an incongruous image, a snapshot difficult to reconcile with the fury and tenacity Mack brings to the football field every practice, every game.

A Chance for Revenge - Sports - The Spectrum - University at Buffalo
"If you look at all the things from a year ago at this time, we're a better football team," said head coach Jeff Quinn. "We know we have the capability of [winning], and now what we need to do is keep our mindset locked in for four quarters and play with superior effort to our opposition."

Predictions: Big East Week 4 - Big East Blog - ESPN
he Huskies have been dreadful on offense, and need to find some consistency at quarterback. Here is hoping coach Paul Pasqualoni comes to a decision and fast. The Bulls put a scare into Pitt in the season opener and are capable hitting some big passes. But the UConn defense is going to stop giving up the big plays which will help the Huskies win. UConn 24, Buffalo 17.

University Of Buffalo Football: University Of Buffalo Football Team Improving Under Quinn - Courant.com
There is talent on the Buffalo roster, including receiver Alex Neutz (17 receptions) and sophomore linebacker Khalil Mack (preseason All-MAC). Quarterback Chazz Anderson, a transfer from Cincinnati, has completed 64 percent of his passes while throwing for 589 yards and three touchdowns.

Buffalo Bills give me a reason to care!

Naaman Roosevelt is ready to seize the opportunity " Sports " Niagara Gazette
"Naaman came in at the end of the year last year and did some good things," he said. "I don’t think there’s any reason that he can’t come in and help where needed and have an impact. He’s not going to ever give you the speed threat down the field that Roscoe gave you, but there are some things he does well in his own right and you try to take advantage of those things he does well."

UB Rowing Hosts First Race on Saturday - Buffalo Athletics
The University at Buffalo rowing team will host its first race of the season on Saturday morning against Canisius and D'Youville. The race will start at 9:00 am on Tonawanda Creek.

Bulls Hold On For Five Set Victory At Akron - Buffalo Athletics
The University at Buffalo volleyball team held a 2-0 lead on Thursday evening, but were forced to go five with the Akron Zips before prevailing 3-2 in the Mid-American Conference Opener for both teams. The victory improves UB's record to 8-6 on the year and 1-0 in the MAC.