Share All sharing options for: UB Picks up Dan Collura from DeMatha 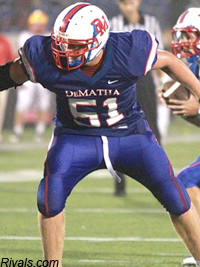 DeMatha offensive lineman Dan Collura has flown under a lot of radars. He has not really been vetted by any of the major services and only had one offer to date, from Buffalo. So it's hard to know how good his fundamentals really are, but his measurements are what you would expect from an incoming offensive tackle.

It could be because he was at guard last season so no one has really seen how he will manage being a tackle. Tom Lemming of MaxPreps wrote:

He played guard in 2010 proving to be an aggressive run blocker with good footwork. He shows good quickness off the ball, is good in pass protection, can read defenses, and takes very few missed steps. He can redirect and shows good leg strength, which allows him to set a solid base. Not there yet, but he certainly has Division I potential.

But even with the Move Collura is on a DeMatha unit that Branden Roth is calling one of the best offensive lines in Maryland. Collura himself is considered the third best lineman in Maryland by MaxPreps.

Collura will join former DeMatha teammate Kendall Patterson who was one of last seasons key recruits. DeMatha is a very nice school in the region and one Coach Quinn seems intent on maintain a relationship with. As good as they have been DeMatha is in the middle of a sea Change.

New coach Elijah Brooks, a 27-year-old four years removed from college, isn't exactly the same big draw that McGregor, one of the most respected HS football coaches in the country, was. In fact, if there was a single local powerhouse that Maryland had to damage its relationship with, DeMatha would probably be the one I pick. --Ben Broman, Testudo Times