Talking Bull: You Can't Keep a Gopher Down

Share All sharing options for: Talking Bull: You Can't Keep a Gopher Down 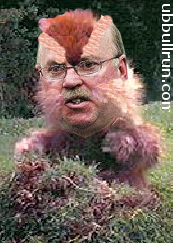 Jerry Kill is one tough guy, and the College coach who looks the most like his teams Mascot! For those of you who don't know Kill has a history of medical problems going all the way back to a cancer that he overcame.

Late last week he had seizures and was taken off the field. But don't worry Gopher fans, He back!

PHOTO: Jerry Kill Back At Minnesota Golden Gophers' Practice - From Our Editors - SBNation.com
Normally, a photo of a coach addressing his team after practice wouldn't be particularly noteworthy. But nothing about this situation is normal. Minnesota head coach Jerry Kill is out of the hospital and returned to practice to address his team on Thursday. After what unfolded on Saturday, just seeing Kill up and moving is an excellent sight.

Here is hoping that Kill can get back to his old self and do something with the Gophers, working around Minnesota fans right now is like being at an Irish wake. There is a lot of joking and joy talking about the good old days but at their core they are crying.

The Mac Daily - Major coverage for a major conference.
Neither of these schools is at the top of the MAC right now, but they're both exciting teams that could sneak up on you. Playing at home, Ball State should prevail in a game that will be tight until the final whistle. -> Prediction: Ball State 21-14 Buffalo

Scouting Ball State - Sports - The Spectrum - University at Buffalo
Buffalo was second in the MAC in pass defense last year, and the Bulls looked better than ever in the past two games. Ball State simply does not have the personnel to overcome the Bulls tenacious defense. Buffalo will have more downs to work with as a result. Expect sophomore running back Branden Oliver to take advantage of the extra carries and control the game.

UB Ice Bulls : Bulls Introduce New Players
The UB Bulls Men's Ice Hockey Club would like to announce the newest members of the team. Take advantage of your first opportunity to see the 2011-2012 Bulls on September 23rd vs. Kent State. Game time is 8:25 PM at the Northtowns Ice Center in Amherst.

The rest of the story:

TheChipReport.com - A Central Michigan Football Blog
I had the pleasure of asking the MAC’s round table a few questions this week and also answered my own questions.

Bulls March into Indiana - Sports - The Spectrum - University at Buffalo
Fans who have watched the Cardinals this year still aren't sure what to make of the team. In the squad's first matchup, Ball State pulled off an impressive 27-20 win over the Hoosiers. A week later, though, the Cardinals got hammered by South Florida, 37-7. Members of Ball State said they were humbled by the loss.

Smith grapples with next move - UB Football - The Buffalo News
Smith probably doesn't end up at UB if his senior football season at Pen Argyl (Pa.) High on the outskirts of Allentown goes off without incident. Five games in he suffered a leg fracture. Schools in the BCS automatic-qualifier conferences that were recruiting him steered away. In February of 2007 he accepted a football offer from UB that had remained on the table and pressed forward to salvage what he could of his high school wrestling career.

UB Ready for MAC Opener | wgrz.com
The Bulls will look to win their MAC opener for the fourth straight year. Last season UB won at Bowling Green to start conference play, but that would be their only MAC win on the season. The Bulls lost to Ball State 20-3 at home last year. "This is a different team, this is a new year, a different team," said Quinn.