Its been two weeks and that means it's time for another fan stampede. After two weeks UB is where we all thought they would be. They are sitting at five hundred with a loss to Pitt and a win over Stony Brook. But it's not the record that is getting UB Nation geared up but it's the performance of the offense. On the flip side there have been quite a few things that should concern UB Nation going and five or more wins is by no means a certainty but it is far more likely than I would have thought a few weeks ago.

1) We have seen a win and a loss. The Bulls played each better than just about any last season. What is the number one positive surprise?

Bulls2010: Straight up running game. Not trying to take it wide. The difference is UB is lining up and running straight at the D. And getting yards. It helps that we now have a QB who can make some throws to keep opponents from not stacking the bo x?

BCBull: Chazz Anderson and the entire offense. It's been quite a while since I've felt like the offense has actually been able to dictate what it wants to do, rather than hoping it can find a weak point or two in the defense. Even though Chazz will only be with us for a year, I think he's clearly demonstrated his worth, and I have to imagine his experience and maturity as a 5th year player will help him bring up the underclass QBs and prepare them for next year.

BRJACR: A running game, at the very least, a threat of a running game.  It has opened the doors for the offense, and thankfully nothing like what we saw last year.

ChiTown: The most obvious surprise is the emergence of Branden Oliver and the running game as a whole. With that said, I am going to go in a different direction with my answer. I think the best surprise has been the depth at DLine. We knew our starters were going to produce, but I dont think we could have expected guys like Wyatt Cahill, Colby Way, Kristjan Sokoli and Dalton Barksdale to produce the way they have been. They have really been a pleaseant surprise, and will keep getting chances to make plays with all of the focus on Mack and Means.

Bulls2010: Run defense. Yes we can get after the QB but at the expense of some large holes. We have been torched twice by running backs. This is concerning because this should be the strength of the D and the weakness perceived was the secondary.

BCBull: I'm still a little worried about the run game. Maybe this is because I have to listen on internet radio and haven't seen Oliver run yet, but it feels to me like we're still hoping to catch lightning instead of having a consistently effective rushing attack. It just so happens that against the SeaWolves Oliver caught lightning three times.

BRJACR: What the old adage?, "run and stop the run?"  They are managing the first part alright, but the second, not so well.  Pitt's Graham ran for 201, 75yard garbage time TD run included and this week Stony Brook's duo ended up with 167yds combined.  If they can start forcing teams to rely on the pass more because there is no room to run, then they can start teeing off on the pass rush, something I believe they are suited for.

ChiTown: Again, I think the obvious answer would be the young, inexperienced defensive backfield. But, I am going to go with Oliver, and the fact that he is a workhorse in the backfield. I know everyone raves about how he is in amazing shape, and can take a beating but at some point he has got to become fatigued.

We are going to need another back to take some weight off of Olivers shoulders, whether it be Anthone Taylor or Jeffvon Gill. If Oliver continues to get every meaningful carry in the backfield, then I fear that he might burn out later in the season.

3) Huge Crowd for this weeks game, even though we are coming off a loss, a 2-10 season, and were playing an FCS squad. What is driving the enthusiasm this year?

Bulls2010: Multiple reasons. First it has to do with Quinn campaigning in the community. The NFL stand-off helped as well as well as a terrible product for years. What has really helped is the local media picking up this team and running stories. The News having many articles during the week. Local TV stations have the Bulls in the news. Also, Quinn’s fiery personality drives people to the stadium!

BCBull: I'm not as surprised as most about the crowd, I guess. I'm also not convinced that it's a sign of increased attendance throughout the whole schedule. The Buffalo News and True Blue have both done so much to simply increase awareness both off and on campus, and the first game of the season is usually going to draw a lot of people who are willing to come and check it out, but attendance is most connected to winning IMO, and the first game is the one that relies the least on winning, so I'm taking it with a grain of salt. Check back in October.

BRJACR: I want to say that the Bills are driving away more fans, but after the Bills game yesterday, the Bills probably kept some people hanging on the edge of the cliff a little longer.  Alot of the turn out could have just been the result of having a beautiful day for football, and it brought out some more people.  I also think with the stepped up coverage that the Buffalo News has been providing, probably helped alot in garnering some additional interest.  Keep winning, and they will come. 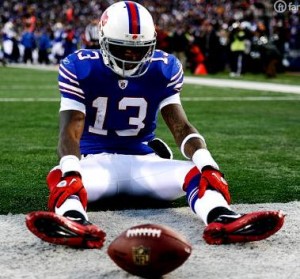 ChiTown: I think there are a lot of props to go around, and I think it starts with the student section. True Blue put together a great plan pre-season to connect to the students, especially the incoming freshman, and it seems to be paying off. Second, Coach Quinn deserves a lot of credit for connecting with the community, and getting the UB name out there. The players to, doing the "UB in the Community" events. I know reading some comments on facebook and twitter, the players were loving the crowd and it felt "live." I expect a great atmosphere vs UCONN, so I hope that Quinn brings along some recruits for their official visit during that game. If we start winning some games, the atmosphere at UB could become something special.

4) Would any of you care to amend your preseason predictions? Why or why not.

Bulls2010: First of all UTEP must be terrible. It did not help that Pitt struggles to win last week over a team that I would predict Buffalo to beat.

BCBull: I'm sticking with my (post-Chazz) preseason prediction of 5 wins, basically because when I made that prediction I was hopeful that Chazz's familiarity with Quinn's offense would help the Bulls control games a little more, and that seems to be exactly what's happened. Also, Khalil Mack. Because I somehow typed 3 1/2 paragraphs without mentioning his name.

BRJACR: Nope, still to early.  I need to see the Ball State game first.  They lost too a AQ school, and took care of business against an FCS school.  Not to different from last year yet.

ChiTown: My prediction remains the same at this point. I said 5 wins should be expected, but 6 is not out of the question. We're on the right track

5) Ball State coming up. The Cards have a win against their local Big10 team and gotten crushed by one of the better Big East Squads. Personally I am a bit nervous about this one whats your prediction.

Bulls2010: I see that this game will be tightly fought. I just see that Ball State will be able to pull away at the end. Score may not look close but the game will be.

BCBull: Ball State has definitely shown in the first two weeks that they can play football. Fortunately in my world the Bulls are always victorious in the pregame predictions. To win however, the offense needs to continue to control the game, win the time of possession, and not be forced to play from behind. Bulls 24-20

BRJACR: Well, If UB is ever going to be looked at as a successful and consistent program, can't be nervous about a game against another MAC team.  No prediction, but

Ill say this.  After the Stony Brook game, there was a lot of talk on the post game show about UB liking the "under dog" role and that they, as a team believe they can be MAC contenders.  OK, well heres your first shot to prove it.

ChiTown: There is reason to be nervous, as Ball State has a decent win over Indiana. They also got man handled by USF. I understand USF is a good team this year, but Ball State was completely out matched and out classed. There only score was in the 4th quarter, when it was 37-0.

One thing that sticks out is BSU's quarterback, Keith Wenning, has a 74% completion percentage, but hes only thrown for 321 yards. This tells me they run a lot of failed screens, or there receivers cant do anything after the catch. Sounds like the key is to limit the big play, and let them dink and dunk down the field until we get a stop or a turnover.