The Bull Run Inquisition: Over the Pylon

Share All sharing options for: The Bull Run Inquisition: Over the Pylon

Let's not get ahead of ourselves. When your psyched that you beat up on the Seawolves the Inquisition has lost a step or two. It's been so long since Buffalo was a remotely intimidating team that it's harder and harder to coax answers out of our guest. 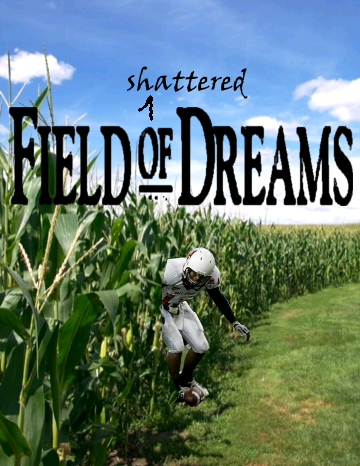 For instance this weeks guest, Over the Pylon, should be an easy mark.

You can make most BSU fans sick if you get them going about the 2008 Championship game. The combination of their then overly developed sense of superiority and the collapse on the field, off the field, and in their Athletics department in the wake of that game, well its like "no goal" and "wide right" wrapped into one neat little package.

Last season all it took was a loop back play of fumble-palooza and he cracked. This year, nothing.

Luckily for me there is a new independent movie showing at theaters in Muncie.

It's the quaint story of an Indiana Corn Farmer who cuts a football field into his land hoping that he can draw out the spirits of the games all time greats, who never won a Superbowl.

The only problem is that instead of Dan Marino or Barry Sanders he ended up with the 2008 Ball State Cardinals. It opens with Nate Davis stumbling out of the corn field looking for a fumble.

Nearly the entire movie involves the farmer trying to convince the wayward Cardinals that its no longer 2008. By getting rid of them he might attract players people want to see or, at the very least, he can grow corn again.

I'll be honest. The production value was awful so even if the story is not painful enough Nate Davis's acting (yes he stars as himself) is!

Shortly before the third act Alan relented and gave up the following information.

From the outside looking in it seems BSU has turned things around, and I don't just mean on the field. Lembo plucked seemingly from nowhere has the card playing well(ish) and the neutral site game against Indiana was a huge success for the program both winning and drawing 40,000 to the game. Besides the new coach what else is changing the culture in Muncie?

To be honest, like every MAC school, winning. As much as I've lauded Coach Lembo for trying to draw in fans and pressing the flesh and making the program a local draw, all that handshaking and open forums won't make a lick of difference if wins don't come. After beating IU in front of 30,000 Cards fans (and 10,000 Indiana fans) that will go a long way to making a culture shift. Last weekend's game won't diminish it, as USF was ranked and most BSU fans also watched the highlights of South Florida beating the Fighting Irish. Lembo's making good inroads with the community, boosters, and media. He's getting good leads on the recruiting trail. He's landing several BCS conference transfers. This isn't an overnight rebuild, as there were a ton of things that needed to change systemically, but he's off to a good start. Winning his conference opener at home will be the next step, one I think he takes easily.

How has the first two games altered your expectations for BSU football in 2011?

Honestly, no. I figured non-conference at best was 2-2, MAC at best was 5-3. I figure we drop one we shouldn't in conference still, so that makes us 6-6, which to me is impressive considering the offseason we had, the last two years, and Lembo's jump to FBS. Newsflash... most Cardinal fans always expected to beat IU.

VooDoo5 had the following to say about the BSU passing game:

"Keith Wenning doesn't appear to have a real strong arm, and their receivers don't easily get open down the field. Wenning throws a lot of passes aimed downward, so they don't turn the ball over."

Is this true, if so is the type of passes thrown by design?

No, it's not true. Wenning is learning a new system and to be frank, with South Florida's speed it was hard to stretch the field and show off the cannon. If there's a team that wants to think that, I encourage the to play the likes of Tori Gibson and Jack Tomlinson super tight and see how that works out for you. Wenning is just a sophomore, so his comfort level isn't the same as it will be next year or the year after, and his first two opponents were BCS caliber teams, one of which is probably Top 10.

Note: I happen to agree with OTP about Wenning and the fact our secondary is green and a bit banged up already really worries me.

What have you seen from UB that worries you most?

Honestly, nothing. After playing IU and South Florida, nothing worries me much anymore. Buffalo isn't South Florida, and the reason why that game was so lopsided was two-fold: Our turnovers and their speed. One of those things we can control, one of those things doesn't apply to the Bulls. If BSU has a mistake-laden game, then it's close. If we play average, it's a comfortable win. If we dominate the line like we did against IU, it's a laugher. This BSU team is far better than the bucket of yuck we brought to Buffalo last season and we both remember how that worked out.

Prediction on the final score and what will be the difference?

Now there's a Ball State team who isn't on a high from beating an in-state rival, they've had all week to get drilled in practice and not lauded as conquering heroes, and it's the home opener for a student body and fanbase that's ready to rock the red. In sheer talent terms, the Bulls will be the least amount of opposing talent that BSU has had to square off against all season, and this is ripe to announce their presence with authority in the MAC. BSU dominates the line offensively and defensively, doesn't get shellshocked from the opening kickoff, and wins going away 37-14. And I feel like that's being generous for the Bulls with a couple of garbage TDs in the 4th quarter against the 2nd and 3rd string.

Be sure to keep up with Over The Pylon this week for all the Ball State news you can bear to read.