Share All sharing options for: Time to hate: Ball State

Buffalo, and the team they steamrolled in the 2008 MAC Championship game have changed. Neither has had a winning season since and neither is running with the same coach that got them to their last bowl game. Heck the Cards are on their second coach since their MAC west Championship. Last years game was a pillow fight of epic proportions, one that UB lost.

This game is huge for both teams. Not *quite* the pillow fight from last season this game is more like a rubber hose fight. whoever wins this game will have conference win and they will have joined the club of middle tier MAC clubs.

But there are signs of life in Muncie, as if residing in Muncie can be called a 'life'. Yes the Cards beat Indiana a Big10 team. As much as I would like to deride them for picking on the very worst the Big10 has to offer I must tip my hat to them for doing it, and doing on a neutral site in front of 40,000 people who apparently could not swing tickets to Brian Kelly and the travesty of Notre Shame.

Yes Charlie Cardinal is smiling for they beat Indiana which would have been like UB beating Syracuse back in 2007, the last time we had a real shot. But could Indiana beat Stony Brook? could UTEP beat Indiana, who the hell cares! All  I know is it's time to hate Ball State!

Location: Muncie Indiana... No really people choose to study there... If you want to see Muncie OTP has put together a visitors guide.. Don't worry once you get past the smell I've heard Muncie is quite nice.

Head Coach: Pete Lembo a name nobody knew last year at this time...

... Great hire if you can't get acaoch from the FBS level who wants to share his office with other sports teams

Series: 7-1, BSU, but the Bulls lead in games worth caring about! 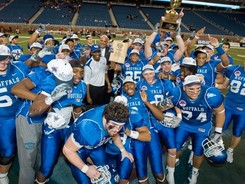 Last Meeting: 2010, a BSU 20-7 victory in Buffalo. UB lost their starting QB early and it only got worse