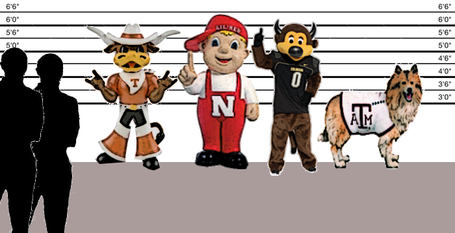 Show us where the SEC touched you mr Beebe

The smoldering wasteland that is the Big-12 has one more massive crater. The long drawn out move of Texas A&M to the SEC is nearly complete.

Texas A&M to the SEC
Texas A&M is officially headed to the SEC, and programs around the country are scrambling to reserve their seats at the new table.

This has the potential to set off a row of dominoes that makes the B1G expansion look like a hiccup, which is basically was. Now the Big12 is really the Big9 with several of the more high profile members starting to wonder if they should grab a lifeboat.

At the very least the 12 will try to expand but I suspect that there is not a lot of desire from teams in more stable AQ conferences, which now includes the Big East, to move to a conference which seems to be a way station. The Question is what Non-AQ's do you go after.

Baylor, who threw SMU, TCU, and their own mother under the bus to get into the Big 12 has an idea....

Conference Realignment: Baylor Football's 'Texas' PR Angle Remains Unconvincing - From Our Editors - SBNation.com
Now that his football program is one step closer to finding itself in the conference wasteland, Ken Starr is again trying to convince you that Texas football and Baylor Bears football mean the same thing:

Houston or SMU would be quick to join but not because of they want to share Baylor's vision. They would join for the same reason any other non AQ would join... For the cash.

Anyone who says they know what the Big9 will do is full of it. Right now the only thing thicker than the rumors is the SWAG. Maybe they stay at nine, maybe the pick off some of the better non-aq teams, and maybe they stay with Texas schools.

The real lesson here is that if you want a stable conference you have to treat all the members equally. You cant have Bevo pulling more weight than Iowa State, no matter how much more Texas might mean to the conference.

One less future competitor for A&M

Dee Finley Arrested, Charged With Felony - Alligator Army
Officer William Sasser pulled Finley over at 1:49 p.m. after Finley drove his scooter around a barricade at Ben Hill Griffin Stadium. Sasser asked for his license and registration, but Finley told the officer he was late and did not want to give him the information, according to the arrest report.]

MAC honors Mack - Campus Watch - The Buffalo News
UB linebacker Khalil Mack has been named Mid-American Conference East Division Defensive Player of the Week for his performance in Saturday's 24-7 romp over Stony Brook. Mack previously had been named National Defensive Player of the Week by College Football Performance Awards. Mack, a sophomore, had eight tackles, 3.5 tackles for losses, forced two fumbles and picked off a pass as the Bulls evened their record at 1-1.

More on the past week of football:

Mike Hart Roots For Eastern Michigan, Not Michigan - Hustle Belt
Mike Hart, of Michigan football running back fame, and once-Indianapolis Colts grit-performer, is now an assistant with EMU. You already knew this. You might not know his official title ("offensive quality control assistant") and you can certainly attribute EMU having the most rushing yards per attempt in the country to some of his mentorship. But you may always wonder if the Wolverines legend really has his heart in the right Washtenaw County quadrant. Especially with EMU and Michigan locking horns this weekend for country bragging rights.