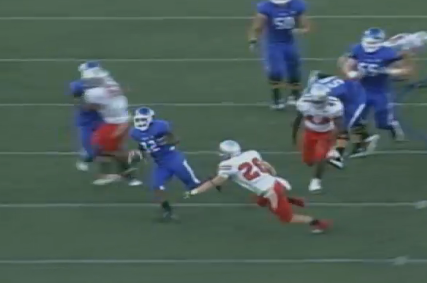 It's safe to say that all of UB Nation was expecting a win against Stony Brook, but I don't know if we expected everything we saw. With that said, here are a few post game thoughts I had.

What we already knew -

-Khalil Mack is a straight up beast. Seems like every time we need a play, he finds himself in the backfield making a stop on the back, or a QB sack. He is on pace for at least 12 sack / force fumbles. This guy is only a sophomore.

-Chazz Anderson is that dude. Anderson is the guy who is going to give us the best chance to win this year. After seeing him in some interviews, I think he is also the perfect guy to mentor the young guys. He is a class act that will win this team some games.

-We are a better team this year. We learned this last week, but it became very clear today that we are much improved. Quinn and the staff are making it a priority to stay balanced on offense, and play hard physical defense.

What we learned from this game -

-Bo Oliver DOES have the explosiveness that we have been hearing about for over a year now. Those 3 touchdown runs were amazing, and something we haven't seen since the Super Bowl champion Starks. Great game from Oliver tonight.

-Devon Hughes is the new Ed Young... except he doesn't drop passes. Seems like Hughes is primed and ready to step right in for Young as the main slot / 4 reciever. Great to see Hughes get his first career touchdown tonight.

-Wyatt Cahill played an outstanding game, batting more than a couple passes down, one leading to the apparent pick six by Mack. Cahill is going to be a key part of the defensive line rotation, along with Richie Smith who continues to play great.

-Colby Way seems ready to play a huge part of this defense. He had a sack vs PITT, and at least a sack and a half tonight vs SB. Way, only a RS freshman, seems to be taking advantage of all the attention to Mack and Means, and making his man pay. Good to see someone else step up.

-We can win a game where our big two recievers, Nuetz and Rivers, don't do much. They were quiet all game, but other guys stepped up. Oliver, Hughes and Dennison to name a few.

-Shoutout to the student section. You guys looked great on TV, and I could hear you. Keep that attendance up!

What I wish I didn't learn -

-That 95 yard scoring drive by SBU was bad. We should never give up a TD in under 5 minutes, when the team is backed up to 2nd and 13 at their own 5.

-Seems Fardons range is no more than 45 yards. I thought I read that he was kicking 50 yarders in practice.

-I guess sticking your hand out before you reach the end zone is a personal foul. I can understand if you stick it behind you, and are taunting another player, but come on. That call is ridiculous...

Overall, this was a game that we had to win and we did. Credit the players and the coaching staff for not taking SBU lightly, and putting them away. Now it's time to focus on Ball State and start the MAC season with a win.

Player of the Game?