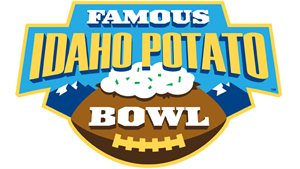 A Bowl by any other name:

No more Boise Bowl the moniker, like so many Bowl Names, was subject to luke warm interest by a sponsor. This season the previous name was not picked up.

So what do you call a Bowl game in Idaho?

I give is a 6 out of 10. The 'Famous Idaho' part is something of a mouth full but unlike a lot of current bowl Names Potato actually has something to do with the location (like the Orange Bowl or the Pinstripe Bowl). Unlike the "GoDaddy.com Bowl when you hear the name "Potato Bowl" you think of Idaho.

I thought we had something special:

Speculation had abounded about the B1G expanding to a nine game schedule and yesterday we got the answer.

Big Ten expanding to 9-game league schedule
The league announced Thursday that it will adopt a nine- game conference schedule beginning that season, an idea embraced by administrators but not supported by a majority of Big Ten coaches.

If there are still just 12 games in 2017, when this starts, then it will be harder for MAC teams to get those neutral game sites with Big 10 teams. It may become harder to even get a road game with them for a good price (Supply and demand being what it is).

This might force the MAC to evaluate going to 9 games themselves a lot of the teams have a road game here or there against the B1G.

Well it's better than nothing, I suppose:

USA Today released its preseason poll and NIU has a few votes. Thats it for the MAC.

No Tweets for you KU::

Steve Spurrier, Turner Gill Teaching Personal Responsibility By Removing It Altogether - From Our Editors - SBNation.com
Gill is banning Kansas Jayhawks football players from tweeting during the season (a happy medium) while Spurrier just went and banned the while darn thing:

In his last season at Buffalo Gill seemed to give the players too much slack. We saw cellphones and texting on the sidelines. Seems Sir Turner has learned from that.

Going for the Gold:

The Men's Swim team upset powerhouse EMU (yes, outside of the revenue sports EMU is a very solid school that has owned swimming over the years). In doing so they saved UB from a second consecutive year of no championships.

They are also great at getting out for the other teams so it's great news to hear that Matt Hogan, and others have qualified for the US Olympic team trials.