Share All sharing options for: The full revels of UB's new uniforms

I think my expectations were so low that this gets up over the bar, albeit barely over the bar. Its a bit of a fuzzy picture but we can tell that the numbers are too small. We can start to see the fat white stripe on the blue away pants (can't see the lettering). 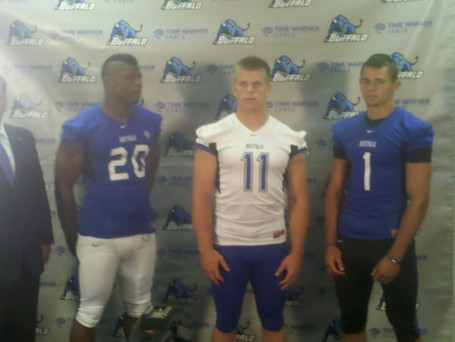 Surprisingly the black pans look sleek. The uniform sporting the most black is the one I think looks the best. McKissic and I have a similar take on the numbers.

Not sure I'm crazy about the unis, especially when it comes to identifying numbers from afar. - Bob DiCesare ( I had earlier attributed this to Rodney McKissic because, well, I had a moment of extreme stupid) 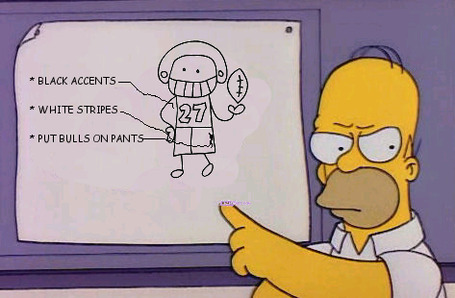 I'm on the fence as well, but like DiCesare I am hoping they will grow on me.

So how low were my expectations?

This is kind of what I expect was going on in the design room. A mix match of different 'hip' features brought to you by the mind that created Homer Simpson's Dream Car.

No word on if there has been a helmet change and there are no picts floating around yet. I suspect something might have been leaked by now if that was the case.

Update: Now they are on sale: Just in case none of you have already purchased my Christmas Gift.. 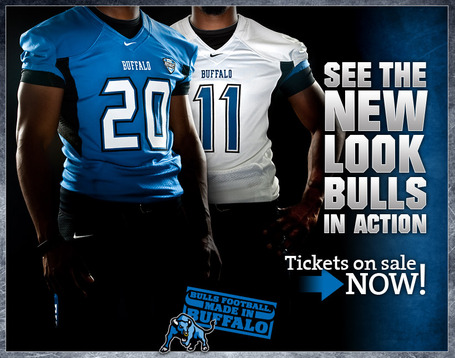 So lets hear it which of the three is the more passable uniforms?