Next Bull In: Collin Michael

Share All sharing options for: Next Bull In: Collin Michael 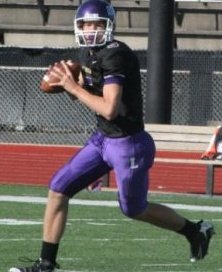 Collin Michael we've been waiting for you!

In case you slept through 2010 let me catch you up. UB is still waiting for the next Quarterback to bring some swagger to the offense. Buffalo sported the worst offense in the bowl subdivision. Three players got a shot at it, nobody really stuck.

Chazz Anderson is, at best, a band aid over a more serious Quarterback issue. The upside is he may earn the job this season. The down side is his one year left to play. Pulling in a star caliber Quarterback this off season had to be a huge priority.

The Bulls have two freshman, Joe Licata and Tony Daniel, entering camp this year. Each has the potential to be "the guy" but if UB fans learned anything from the Zach Maynard fiasco its this. You better have more than one star ready to get under center.

Michael has always been a star. Some Promising play early in his High School career had him on the radars of multiple big name schools. But a terrible knee injury sidelined him and bumped him down a bit.

Collin is huge but lean, he stands 6'5 and weighs 210. Most described as a pocket passer but he has the awareness to buy himself a few more moments. ESPN made a few notes that are huge for Jeff Quinn's Offense:

Michael was holding offers from both CMU and Temple.