Share All sharing options for: Pro Day 2011: Know your Bulls

There are currently six Buffalo Bulls on NFL Rosters, only three of were invited the NFL Combine. The rest all got to strut their stuff only at the annual "Pro-Day" which takes place at the Ralph Wilson Field house. Last season Naaman Roosevelt and Mike Newton impressed scouts enough to earn a quick phone call after the draft. Before the season was over they were both contributers on their respective teams.

So even though Josh Thomas was the only Bull at the combine chances are at least one other UB Senior will do enough this Thursday to end up in an NFL camp this spring.

Each university has their own Pro Day, an event where NFL scouts are allowed to come to the school and watch players participate in the the same drills performed at the combine.Its a chance for seniors who went without an invite to show why they should be at the next level. Its also a chance for Juniors to get themselves on NFL radards.

College teams which produce a large quantity of NFL prospects generally generate huge interest from scouts and coaches at their Pro Days. UB's Pro-days have grown considerably over the years and chances are this one will be well attended.

What Players are most likely going to be of interest?

Shannon has owned the Bulls defensive backfield since 2007. He four time all MAC defensive back who broke multiple school records. He led Buffalo in tackles with 120 and added four interceptions, two pass breakouts and a fumble recovery during his senior seasn. He finished his record-breaking career with a school record 461 total tackles as well as first all-time in solo tackles with 258.

The only knock against Davonte is his speed. His instincts, toughness, and mechanics are sound but at last years proday the then Junior ran a very substandard 4.75 40 time. If he wants to generate any draft interest at all he is going to have to get that down under 4.5. A time under 4.6 might get him a quick call as an undrafted free agent.

Aside from Josh Thomas Davonte Shannon might be the Bull who has the best shot at getting drafted. Many NFL mock drafting sites have commented that this years class of safety is very thin on the top so there is room for Shannon to establish himself, especially if he gets that 40 down.

Bittner is All-MAC performer (2009) who has made 50 straight starts during his career. He is a local guy who was key to turning around UB's Football Program.

Under his leadership the UB Line protected Drew Willy and James Starks during the 2008 championship run and continued to break records even in the down 2009 seasons.

He can do enough to generate some pro interest, perhaps from the CFL, UFL, or other league but most NFL Drafting scouts have him in the mid seventies among guards. Given that seldom are more than 30 offensive linemen taken Bittner would have to be all world this week to get a call during the draft.

What he has going for him is toughness. 50 straight starts for an offensive lineman is an Amazing accomplishment. His play was solid enough to get into the Dixie Gridiron Classic.

Cook is generally perceived as being in the top third of Safeties in this years draft, that may or may not be good enough to get a call during the second day depending on the kind of exposure he gets from pro day.

I think you’re probably looking at second day picks or free agent evaluations. And a lot of that is gonna depend on how those guys perform from a pro day standpoint and how they’re gonna perform if invited to the NFL combine, to try and make that statement and elevate their stock. Having done two Buffalo games, I know both those guys made an awful lot of plays in both outings. So, it’s not gonna be from a lack of being seen or exposed, but it’s gonna be about whether or not people feel it’s the right fit. " -- Tom Luginbill, ESPN

He could this years Mike Newton. Last season all the talk going into the combine was about Roosevelt and Stark's. Newton was on some radars but many of the scouts who went to the pro day were there for the "big two". Then Newton stole everyone's thunder and became the 'it' guy at the combine.

Cook is in that same position. This year the buzz seems to be Thomas (from the Combine) and Shannon. If Cook can get some headlines he might get those NFL scouts to take a second look at his game film. Anyone who watches him will see the presence he is in the defensive backfield. 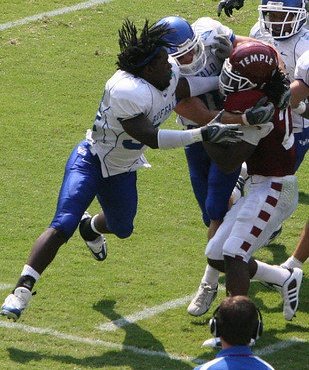 Winters helped guide a group of young players from a 4-3, to a 3-4 defense this past season. As the anchor of the unit he should get a ton of credit for how well the unit performed.

Unfortunately leadership is not something too many NFL scouts take into account, especially with late round or free agent prospects. ESPN has winters rater higher than anyone, and their NFL draft site still has winters as only the 56th best inside linebacker in the draft. NFLDraft scout does not even bother to scout him.

Of all the players going into to combine Winters is generally the most overlooked by drafting sites. Justin was the 2nd tackler on team with 91 and named team's outstanding linebacker his numbers speak for themselves but there are some perceived issues.

The main problem he has is his size. Winters is, on paper, a bit small to play an inside linebacker in the NFL. He is a fine size for an outside linebacker but needs to prove he has the speed for that position. Having a good pro day on the weights also can't hurt his chances.

If you play in a backfield with Domonic Cook and Davonte Shannon and still manage to distinguish yourself chances are you've earned that trip to the combine. Josh Thomas not only went to the combine but had himself a pretty respectable showing, perhaps enough to push himself into the 6th round.

He may do what James Starks did last season, skip the standard drills and take request from the scouts. His 40 at the combine was not earth shattering but it was enough to prove he has NFL speed.

I've seen some rumors floating around that the Rams and Jags have expressed interest in Thomas. Neither team is in desperate straights for a corner so it may stand to reason that if he is hearing from teams with a lukewarm need he is also hearing from some teams with a slightly higher need will be giving him a long look.

I've yet to see a list of scouts expected to attend the combine. Who shows up and what those teams need will be a good measure of the years draft (or free agent) prospects. I've also yet to see a list of any Juniors who plan on attending the event. UBAthletics has passed along that Drew Willy, James Starks, and Naaman Roosevelt will be attending.