Softball Bulls Struggle In The Rain

Share All sharing options for: Softball Bulls Struggle In The Rain 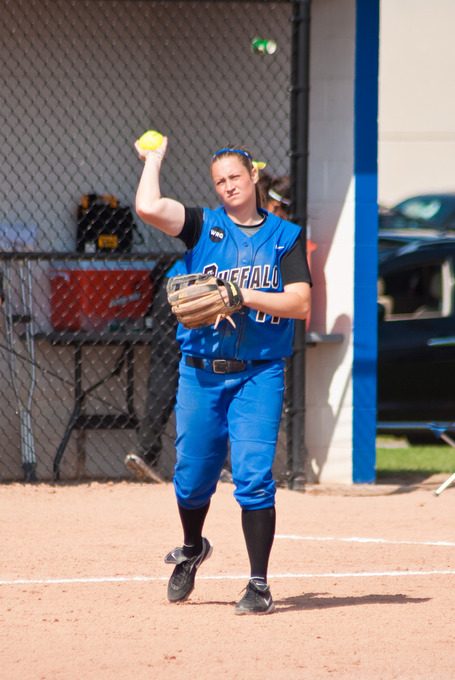 Buffalo got back on the diamond this past weekend, and weather was a big issue at the Marshall Invitational in Huntington, WV. In fact, the Bulls got only half their scheduled games in, having to head back home before Dot Hicks Field was groomed back into playing condition Sunday.

The Bulls began play Saturday against Presbyterian College. Freshman Tori Speckman got the start, and pitched quite well. Her play has improved with each tournament this season. She struck out 9 batters in this game, and allowed only 4 hits and one earned run. Unfortunately, as has been the case all season, the Buffalo offense was anemic, producing only 3 hits themselves. Presbyterian scored in the 1st inning when catcher Kris Waldron, attempting to throw out a base stealer, threw the ball into the outfield instead allowing the runner to make it all the way home. Tori Speckman did surrender a 6th inning solo home run, but can hardly be blamed for this loss. Holly Luciano, Jessica Griffin and Alyssa Ward all hit singles for UB. Presbyterian won 2-0.

Buffalo's second game of the day, against host Marshall, was interrupted by many rain delays. Haylee Land started this game for the Bulls, and was in trouble early and often, allowing 10 runs, 6 of them earned. However, Alyssa Ward (pictured) tied the game at 1-1 in the 2nd inning with her first home run of the season, a shot over the left field fence. Marshall answered immediately in the bottom of the same inning with a run, and would take a 4-1 lead heading into the 5th inning. This was when the rain got really bad, and a long delay ensued while the Marshall ground crew worked feverishly to get the field back in playing condition. They did the best they could, but the poor field conditions would actually help the Bulls tie the game. In the the top of the 5th inning, after an Ashley Bertot single and Kris Waldron double, Jessica Griffin hit a grounder to the second baseman that should have been the last out of the inning. But it took a weird bounce in the mud and made it to the outfield and the Bulls were down by a run. Alyssa Ward then stepped up to the plate and smashed a double to center field to tie the game 4-4. Another long rain delay ensued and Marshall would score 6 times in the bottom of the inning to win going away, 10-4. Alyssa Ward was 3 for 3 in this game for UB. Holly Johnson did not pitch in this tournament, leading to speculation as to why the Bulls' junior sat out after pitching so well her last start. She did have foot surgery last year before she transferred to Buffalo---perhaps a flare up?

Buffalo fell to 2-10, and must work on improving their hitting. Kris Waldron, a .300 hitter her first two seasons, is at a measly .139; the Bulls will go nowhere fast if her bat doesn't wake up. Freshman pitcher Tori Speckman is progressing nicely, but if there is something wrong with Holly Johnson, the Bulls team ERA of 7.02 will not be improving much. Buffalo is now headed down to Florida for a week of games. First up is the Florida Atlantic Tournament this weekend, where they will play Rutgers (Holly Johnson's old school), Purdue, Michigan State, Hofstra and the host school. They will then travel to Florida Gulf Coast for a split doubleheader against the host and Purdue on March 16. Next weekend they will participate in The Game Tournament hosted by South Florida. This will be the Bulls' last big tuneup for MAC play, so it is crucial for them to start playing better.