Share All sharing options for: Brown Delivers, and Delivers 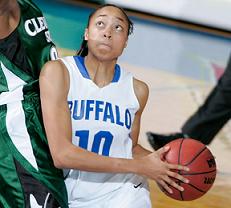 I don't normally mention too much about women's hoops. There are not enough hours in the day for me to do three sports (hence I dropped off on Hockey a bit). Mens Basketball and Football is where the interest seems to be unless you're a program like UConn.

Today along with McCrea winning the freshman of the year award Kourtney Brown won the player of the year on the women's side of things.

While Brown would be quick to point out the amazing athletes that she shares the floor with she is the face of UB Basketball. Maybe the most singly dominant player within the MAC conference to come out of Buffalo in recent history.

That's how good Brown is!

BUFFALO, NY (UB Athletics) – The Mid-American Conference announced on Tuesday morning that senior Kourtney Brown has been named the MAC Player of the Year, the first player in school history to win the honor.  Brown also repeated for a second straight season as the conference's Defensive Player of the Year and on the All-MAC First Team.

Brown has been named MAC East Player of the Week a conference-high five times this year and became the league's all-time leading shot blocker, breaking a record that has stood for 22 years.  Her 663 points on the year are seventh in MAC history and her 352 rebounds are currently third most ever in the MAC.  Her 99 blocks on the season are second most in conference history as well and more than all but three teams total numbers this season.

"This honor for Kourtney is well deserved and something we knew she was capable of when she came here to Buffalo," said head coach Linda Hill-MacDonald.  "She earned this recognition with the hard work she displayed every time she stepped out on the court.  She was the focus of everyone's defense and still found ways to be successful despite double and triple teams.

"The fact that she was also named Defensive Player of the Year is pretty phenomenal and a testament to her hard work on both ends of the floor.  To lead the conference in blocks and be amongst our team leaders in steals is something that I think caught the voters' attention.  These recognitions were made possible not only by Kourtney's hard work, but the hard work and effort of our entire team and coaching staff."

Brown and the Bulls continue MAC Tournament play tomorrow afternoon as they face Central Michigan in the Quarterfinals at 2:30 pm at Quicken Loans Arena.