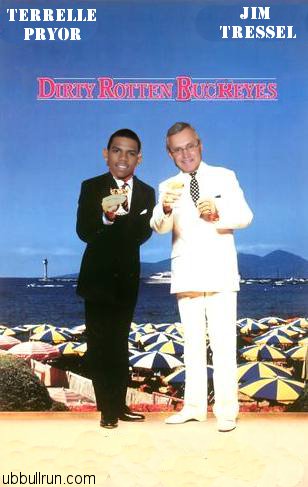 What you mean Jim Tressell knew what was going on? How could a situation where your start sells gear for ink and still gets to play in a BCS bowl go oh so wrong?

Jim Tressel Reportedly Aware Of Terrelle Pryor Tattoo Infractions Earlier Than Claimed - SBNation.com
The Jim Tressel report by Yahoo! Sports, which alleged the Ohio St. Buckeyes coach was aware of the infractions committed by Terrelle Pryor and others for far longer than claimed, was posted three hours after the university was approached for comment, according to co-author Charles Robinson.

If this pans out to be true and the NCAA does nothing than the Buckeye's got away with the NCAA equivalent of Murder!!

But on a brighter note if you want to look at schools that expect a lot out of their players, and are willing to suffer if their players behave badly:

NCAA should follow BYU's lead, enforce athlete violence code - NCAA Basketball - Sporting News
Brigham Young’s Honor Code, which last week caught forward Brandon Davies in a chastity violation and put the basketball team’s Final Four hopes in jeopardy, has been an endless source of conversation and debate, most of it serious, lots of it comical.

The MAC announced the POY and Coach of the year, like BJ over at falconblox I am beside myself at the pick for POY.

FalconBlog--Triumphs and Trials in the BGSU Falcon Nation: Men's Basketball Coach and Player of Year Announced for MAC
But the MAC Player of the Year was Brandon Bowdry. Second in the MAC in scoring, leading in rebounds, he was simply the most outstanding player in the league this year. I know he played for a terrible team--so much the more difficult for him to do what he did. He should have won this award.

Couple of Previews for the MACC:

MAC Tournament Preview: (9) Central Michigan at (8) Buffalo - Hustle Belt
Well, hey, the 8-vs-9 game is bound to be competitive! Ha, you greenhorn. If you didn't catch Ken Pomeroy's mathematical predictions for the MAC tournament, Buffalo's actually the "favorite." As the 8-seed. And in the span of one seed, chances to win it all go from 1-in-5 to 1-in-2000. Insert uproarious laughter.

Ahead of MAC tournament, Zeigler says team still lacking leadership | Central Michigan Life
During the MAC coaches’ conference call with members of the media Monday, Zeigler said his team is still struggling for leadership as it prepares for its first round game Tuesday night at Buffalo.

University of Akron Zips blog —
I think Akron got pretty lucky with this bracket. They dodged Northern Illinois — the only low seed that can really give you problems. They are also in the weaker side of the bracket. The winner of the Akron/EMU vs. Miami game will play Western Michigan, Bowling Green or Northern Illinois. It’s not a difficult road to Saturday.

EMU Football has a Marrow Problem: Yea, kid is going to a big name school where his 45 year old father just happened to become a 'graduate assistant'.

Marrow transfer is no longer a rumor " Eagle Totem
I don’t have any details to share, but he is no longer listed on the EMU football roster. He was listed online as recently as yesterday morning.