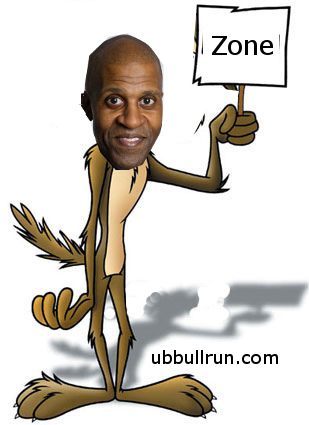 One word almost never used to describe Coach Witherspoon's approach to game planning is 'wile'. So fans and media following last nights game were not the only ones caught by surprise when Buffalo, down by 11, came out of a timeout running a zone, a zone!

As late as last week people were asking him why he was not doing anything differently, on offense or defense, despite UB's slide. Specifically why was UB not trying out some zone defenses.

The answer was sensible and, seemingly, put the issue to bed. Only a couple of MAC teams realy on the zone so our offense would be practicing against set that they would only see if we end up playing Bowling Green (Which by the way is next on UB's schedule).

When you catch Charlie Coles napping you know that you've done your job as a game day coach.

"They surprised me with their zone,""They went to their zone and boy that took us away from what we're doing. We don't have a good zone team because we don't have the two inside guys you need to work the high-low with. ... Key move by Reggie going zone. That was enough." - Coach Coles

Sure caught they guys on WECK by surprise, they mentioned the zone about once every five or six minutes. True it helped the Bulls turn an 11 point deficit into a one point deficit in the span of about two minutes.

The defensive scheme is just what the doctor ordered because the Bulls were awful shooting. Zach Filzen was 4 of 12. Freshman forward Javon McCrea, second in the country in field goal percentage, was a mere 1 of 8, and Mulkey was out early with foul trouble. Overall UB shot 35 percent for the game, 25 percent in the second half.