Share All sharing options for: Grading the Class: Quarterbacks

Its around this time of year that fans start talking about how this is the best recruiting class ever for their school. Fortunately for us Buffalo is relatively young as a program so we get to say that with some degree of seriousness year in and year out.

The true strength this years class wont be known the NFL season kicks off in 2015 (or 2016 for the redshirts). Who would have thought that the class which brought in James Starks, Drew Willy, and Naaman Roosevelt would put three players on an NFL roster? But even with all the unknowns it's worth taking a look at the class to see how Coach Quinns first haul took shape.

In evaluating how good a class is you can't just look at rivals and scout, after all rivals still only has us at eleven recruits, you need to look at the university needs and the gets. Then, especially for mid majors, you have to put aside the number of stars (two or three) and look at how the player fits into your team.

So how did Buffalo do this season at the Quarterback Spot?

The Need: Last year this was a clear weakness on the team but like most things it was line driven. UB's likely emergency Quarterback, Ty Warden, has moved on meaning there are just three guys entering spring camp this season vying for the job.Both had a shot last season and neither managed to complete 50% of their passes.

Both Quarterbacks coming in have a chance at seeing significant time this season. Coach Quinn's giant novelty cane for yanking Quarterbacks got a lot of work last year and there is no reason to assume that he will shelve it this year, especially if the QB's are performing at anywhere near the level they did last season.

All in all the need for this position is extreme. If Alex Dennison is truly going into camp as a tight end you have a Junior who looked awful in every non FCS game last season a Sophomore who runs like a full back and a redshirt freshman who was fourth or fith in line at the start of last season. All of them are good guys and solid athletes but neither is exactly starting spring workouts as someone I'm sure about. 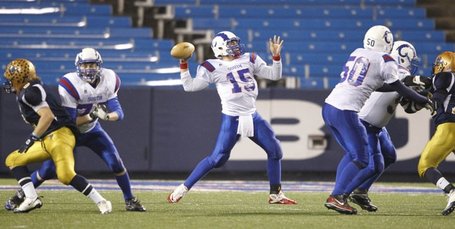 His team ran a fast paced shotgun offense relying more on his arm than any one player. In one game against rival Williamsville North Licata dropped 522 yards. While it wa a record setting effort it was not mind blowing for Jobi Wan.

This was also a signature catch for Coach Quinn. Licata signed on early in the summer while he was still getting interest for some big AQ Programs. Licata had, at one point, had an offers from the Orange but Syracuse wanted an answer faster than Licata was willing to give it.

Word has it that Licata was getting pressed pretty hard as the season wore on by recruiters for other AQ schools. While in the mist of an awful season on the field Coach Quinn held one of the top recruits of the class to a verbal which was made during the new staffs honeymoon period. 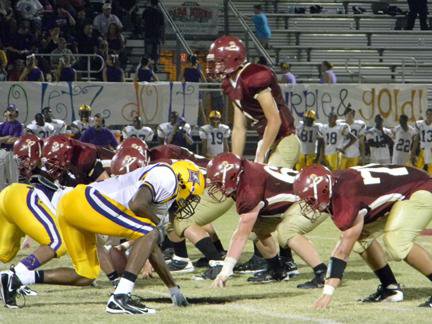 Tony Daniel: Daniel's offense at south Paulding did not even come close to resembling the all out air raid ran by Licata's Williamsville. Four players had either more, or almost as amny rushing attempts as Daniel did completions. Among those four was Daniel himself.

When he did throw the ball it was nothing to get too excited about. Daniel complete 66 or 153 passes (43%) for 880 yards with five touchdowns and interceptions.

Where Daniel excels is his mobility. He moves around really well, rushing the ball 63 times and getting four touchdowns.

He also seems to have some leadership. Despite the run oriented nature of his teams offense Daniel still set school passing records as he led the Spartans to a regional title.

UB Badly needed two passing Quarterbacks for the spread system.If the Bulls already had 'a guy' then one spread oriented QB would be fine, but we don't so this class falls short of an A.

Daniels is a fine athlete and from everything I have read a really great kid but I am not sure he is the answer to our passing game. Like Dennison I think the kid is a player and will find a role on this team. Special Teams, Tight End, who knows? but I really don't see him under center in the spread.

Licata is exactly what we needed but we needed another QB of that model in this class. We needed a second drop back and let it rip QB to push Licata (and the guys already in place).

Maybe thats Dale Stewart? Up until now I was assuming the Niagara Falls Native will be in the pipeline of half backs replacing Nduka and Thermilus, but if Daniel is not able to pass the ball around at a far higher level than he did for south Paulding maybe Stewart gets a bit of work under center.

Update: I had neglected Rudy Johnson in the initial article, Chalk it up to my busy day. Johnson is as much in the mix as anyone else at this point.