Share All sharing options for: Who's Talking Bull? Recruiting... 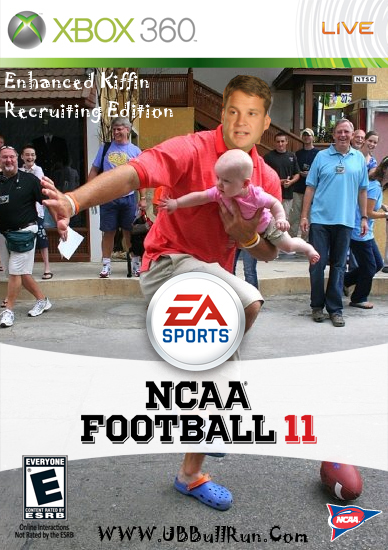 2011 National Signing Day: College Football Recruiting Winners (Clemson) And Losers (Lane Kiffin) - SBNation.com
Kiffin has also managed to lose one of the nation's top recruits to a conference rival despite numerous and seemingly invaluable advantages, lost a recruit to UCLA after swaying him briefly despite the Bruins upstaging their own miserable season with some woeful recruiting, and performed the likely unprecedented trick of reportedly facing NCAA sanctions for work done at a previous school while serving as the head coach of a school currently under NCAA punishment ... for violations committed while he was an assistant coach at that school.

Buffalo Releases 2011 Football Class - Buffalo Athletics
Entering his second season, Quinn added 20 players, including every position, from 10 different states and two provinces in Canada. The class is heavy on line of scrimmage players with a total of eight linemen, five on the offensive side and three on the defensive side. The class also features three defensive backs and a pair of quarterbacks and running backs. Three recruits – Gabriel Barbe, Dillon Guy and Wyatt Cahill – enrolled at UB in January and are on campus now.

MAC National Signing Day 2011: Examining The 13 Recruiting Classes - Hustle Belt
Hey, Rivals? Wanna update your map a little? They did sign 20 guys, and admittedly a couple of their new blood will emigrate from Canada, but there are people from all over here. But at least the map gives us a good cross-section that Jeff Quinn decided to trickle into Ohio and get some guys from marquee schools like LaSalle. They bagged eight linemen overall (offense and defense), which'll help them win that battle of the trenches in the hopes of making everyone better. Hey, this was the team that probably got worse as the season moved on. Whatever works.

New Bulls prove they're committed - UB Football - The Buffalo News
Perhaps the most gratifying aspect of Jeff Quinn's 2011 recruiting class at the University at Buffalo were the number of prospects who stayed committed to the program, which the staff began assembling last February.

National signing day full of surprises - ESPN
When you lose games 55-7, 59-7, 45-10 and 48-14 and finish with a 3-9 record, there is no way you're supposed to be able to finish with the fifth-best recruiting class in the Big 12. But that's exactly happened at Kansas on Wednesday. The Jayhawks finished ahead of traditional power Texas A&M and bitter rivals Kansas State and Missouri.