Rounding out the Corners, Recruiting Style

Share All sharing options for: Rounding out the Corners, Recruiting Style

For months I have been harping that for all the quality this class is bringing in the lack of defensive backs was concerning. Then, I get a wicked lung infection go to bed for the weekend and wake up in a world where UB has not one but several defensive backfield commitments.

I am still a bit under the weather so I am just going to put them both in this post and take whatever happy pills they gave me so I can breath/sleep. 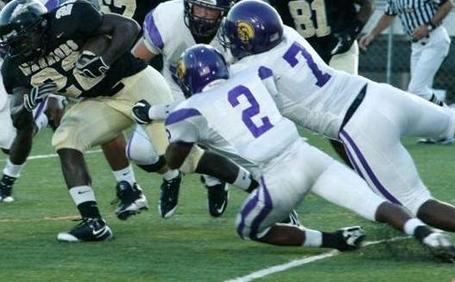 Minniefield was part of a Daphne defense that allowed just over seven points a game in 2010 and a  secondary that picked off 15 passes while allowing only five touchdown receptions. He was selected to play in last month's Max Emfinger All-American Bowl Game Classic in Baton Rouge. -- Rodney McKissic Buffalo News

Seems to have played a safety down in Alabama but was scouted mainly as a cornerback. He seems to be athletic, a good closer who looks to pop receivers coming over the middle.

He was a key player in Daphne's, 6A State Championship run. In fact if not for an unrelated fasemask penalty his late interception would have sealed the game for the Trojans. Instead the rest of his defensive unit held their opponents to a field goal attempt which would fall short. 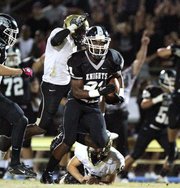 The Robinson High product, who also received an offer from FCS Youngstown State, played some tailback in high school but projects as corner for UB. On Friday, the Bulls landed a verbal from Alabama corner Kyndal Minniefield and is awaiting word from Tampa's Eric Patterson, who along with Baker made an official visit this weekend. -- Rodney McKissic Bufffalo News

Baker tallied 58 tackles this past season picked off a pass and defended nine others.

He also returned kickoffs, averaging 20 yards over four games at the position. The bulk of that was a 65 yards return for a touchdown against Plant.

So now the Bulls stand at three defensive backfiled commits going into tomorrows signing day, while there is always the prospect for some last minute announcements I have been told 22 is what the Bulls were expecting to sign this year making Baker the bookend on the class of 2011.