Share All sharing options for: The "way too early" Buffalo recruiting primer

Say what you want about Coach Jeff Quinn but from where I sit the guy can recruit. He may be just just 5-19 as Buffalo's head coach and he may have just three conference wins in two years but January and February have been fun.

While his classes don't pop off the page as elite level talent, even by MAC standards, on balance they seem to be as good, if not better, than any in UB's modern era. But before I get too hung up on his recruiting acumen there are a couple of things to keep in mind

Firstly a verbal commitment and a dollar get you a cup of Tim Horton's coffee. Most teams have a few commitments drop between the end of their season and National Signing Day. A better offer might come along, they may fall into academic trouble, or some other off the field issues prevents them from moving up.

Last year we saw this when Pat "The Hammer" Williams dropped his verbal to UB in favor of an offer from Villanova. The year before when James Potts nearly missed the season or fell through all together because his transcripts were held up due to financial issues.

Secondly there is a big difference between what a prep player looks like on paper and what they will do on the field. This can be for the good or bad. James Starks was recruited as a Quarterback who was then stuck in Hofher's defensive backfield before Turner Gill put him in the offensive backfield.

All this being said hitting December with more than a dozen known verbals is huge for Buffalo. During Turner Gill's final season UB had usually less than six public verbals when the season was completed.

Quarterbacks (Need 10): UB's biggest need is easily behind center. While they have a gaggle of potential quarterbacks on the roster nothing in the backfield is certain. With the departure of Chazz Anderson we have two quarterbacks who have taken snaps on the roster.

Neither has looked remotely comfortable, or promising during their time on the field.

Behind them are several red shirt freshman including the player who owns the Western New York Passing record books. There is some hope to be had if you count the redshirt freshmen but until that potential is realized UB is without a solid signal caller for the third straight year.

Running Backs (Need 3): A season "Bowling Ball BO" destroyed many of UB's single season records, and perched the sophomore in a position to break some career UB marks next season. The emergence of Branden Oliver makes UB's need at half back seem, at most, slight. Oliver is going to be a Junior and Jeffvon Gill will be a Senior but behind them are Brandon Murie a Junior, and two Sophomores in James Potts and Anthone Taylor.

Receivers (Need 4): Out are Rivers, Young, and Jackson dur to graduation. The only senior next season is Saron Hood. What UB has left is Alex Neutz and a bunch of receivers who really underachieved this season. Neutz proved he can be the main target but there was a ton of inconsistency among anyone returning.

The Bulls need one or two other guys that they can count on. Maybe that develops among the underclassmen but to be safe UB should find the next franchise receiver this year or next.

Offensive Line (Need 6): The line was 20 times better this season than in 2010, but that is not saying a whole lot.

The good news is that what the Bulls have is youth and the size is getting better. Buffalo loses two linemen this season in Matt Ostrowski and Josh Violanti. Both of whom will be hard to replace.

Next season the team will have just two Seniors, five Juniors, and ten sophomores.

So why a six? You can never have enough depth on the line. The teams issues with injuries over the past two seasons demonstrate that seven solid linemen on the roster is not enough.

Turner Gill left the offensive line very thin and because of that the Bulls 2010 season was completely throttled by one or two injuries. Coach Quinn has been getting the unit built back up in terms of depth and needs one more pretty good year recruiting to secure the next several in the trenches.

Defensive Line (Need 7): There are a lot of Juniors and Seniors on the unit and that does not bode well for 2013. The good news is that some of the underclassman showed pretty well this season. Guys like Colby Way and Kristjan Sokoli played a decent number of downs and were relatively productive when the did.

Linebackers (Need 6): Like the line there are a lot of players here who will be gone or Seniors next season. Having Lee Skinner show so well is comforting but do we have five first stringers among the underclassmen? It's hard to say but we have just two years left of Khalil Mack and we need to find the next stud linebacker.

Defensive Backs (Need 9): There is a ton of youth among the defensive backs but man did they get picked on this season. Maybe having the glut of talent back there spoiled UB fans but what we saw this season did not measure up to what UB needs out of it's backfield. 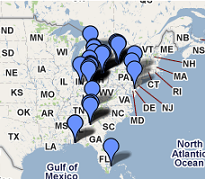 There are two, maybe three guys who showed well enough to factor into a solid backfield but that's not the depth UB needs.

Thus far the Bulls have addressed the Quarterback Situation and beefed up the offensive line. Where the class is coming up short, so far, is in the defensive backfield.

Brandon Berry was rumored to have given UB a verbal but none of the usual sites like ESPN, Rivals, or Scout, have him committed to a school as of yet. If Berry is a part of the class than he, along with C.J. Stancil and William Rembert make for a great class.

Throughout December and January be sure to check in and see how the rest of this years class comes together. Alternatively you could throw me a bone if you hear about any more commitments or players changing their commitment status.