Share All sharing options for: Talking Bull: So $ue me - Big East Edition 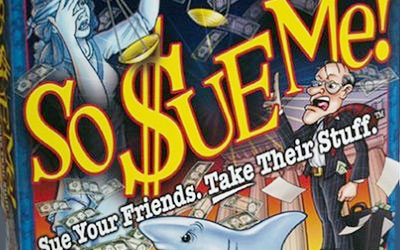 It's a sue-or-be-sued world, so why hold back? So Sue Me is the game where you sue your conference, take an early exit and enjoy the wackiness of today's lawsuits.

A spin of the wheel or roll of the dice and some clever negotiating help you acquire admission to a conference that might survive the Mayan Apocalypse!

Yes, there was really a board game called "So $ue me" and nobody could play like West Virginia who wants out of the Big east so bad they fired a preemptive lawsuit in order to get out of the 27 month waiting period

West Virginia's Big East Lawsuit Alleges Everybody Else Wants Out Too - SBNation.com
West Virginia contends the Big East has been unstable for more than a decade due to its football/non-football split, non-football schools have the power to enforce football-specific rules onto football schools and the conference is presently collapsing. These things are all true. The suit claims that the Big East is in such "serious jeopardy" that WVU "had no choice but to accept" the Big 12" invitation.

The Big East Career Fair: Don't Bring Up Exit Compensation Packages - From Our Editors - SBNation.com
Loyalty. Honesty. Integrity. Tradition. These are the issues the Big East accused Syracuse, Pittsburgh, TCU and West Virginia of being deficient in when they each decided to leave the conference recently. One must wonder then...is there a correlation between the way a university leaves one athletic conference for another and the values that its engineering students take with them into the workplace? We're about to find out at the Big East Career Fair, which is an actual thing.

They are just not into you:

Yet Memphis keeps trying to push all in to the Big East.

Conference Realignment: Memphis, The Saddest Auctioneer - From Our Editors - SBNation.com
''I do think the stars are kind of lining up,'' [Memphis AD R.C.] Johnson said shortly after arriving in Orlando on Friday with the Tiger football team ahead of today's Conference USA football game today against Central Florida. ''We've got an awful lot of people who are sure as heck trying to make this thing work. We think there is a window of opportunity here.''

Bulls Clinch MAC Playoff Berth With 2-0 Win Over Florida Atlantic - Buffalo Athletics
The University at Buffalo men's soccer team earned a trip to the upcoming Mid-American Conference Tournament with a 2-0 win over Florida Atlantic on Saturday night. The win improved the Bulls to 8-7-1 overall and 3-2 in league play.

Bulls Win First MAC Tournament Game Since 2000, Beat Kent State 2-1 - Buffalo Athletics
The Buffalo women's soccer team has been on a wild ride through Mid-American Conference play in the month of October. In the span of one week and a pair of games, the Bulls have gone from the brink of missing the playoffs to sitting just one game away from playing in the MAC title game after downing Kent State 2-1 Sunday afternoon on the road.

UB Athletics Announces Upgrades to Alumni Arena - Buffalo Athletics
The University at Buffalo’s Alumni Arena will be showcasing a new look and game-day atmosphere as the winter season of athletic and cultural events gets underway. Included in the enhancements are state-of-the-art sound and lighting systems as well the installation of a new video and scoring system. The project is a collaborative effort between UB Facilities, Planning & Design and the Division of Athletics with funding provided by the university’s critical maintenance fund and private dollars.