Talking Bull: And this is the *most* qualified Harris Poll voter...

Share All sharing options for: Talking Bull: And this is the *most* qualified Harris Poll voter... 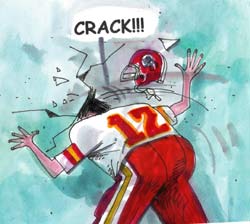 Ok Certainly Frerotte is more qualified than most people might be. Still I would hope that he would be a middle of the pack player in the Harris Poll... Nope, Check out SBNation for the painful list.

Harris Poll Voter List A Who's Who Of Huh - From Our Editors - SBNation.com

The Harris Poll is 1/3 of the BCS formula, so one would expect it to be populated with strong college football minds who know the lay of the land and are able to soak in the happenings of the week before casting a vote that will strongly influence the year's national champion. Just kidding, y'all! This is the BCS. The list of voters in the 2011 Harris Poll was released on Wednesday and it sure is fun. Let's take a look at a few of the names that stand out.

First a long shot at the evolution of the big six conferences:

Conference Realignment Madness Through History - From Our Editors - SBNation.com
Has college realignment got you confused? Not sure which school goes where? Trying to figure out what the heck the SWC was? Wondering what things used to look like before anyone wanted anything to do with the Missouri Tigers?

And now a reason to make it stop

When Tulane Is Mentioned In Conference Realignment, It's Time To Stop - From Our Editors - SBNation.com
This has to end. I get it: nobody wants to be left behind. But when Tulane is leaking realignment related things to ESPN, it's over. This has gone too far.

Hustle Belt MAC Power Rankings: Week Six - Hustle Belt
Chazz Anderson's 68-yard touchdown was the lone highlight in an unsurprising beatdown in Knoxville. Anderson even split time with Chris Zordich, so we'll have to keep an eye on that now. Ohio's injuries may not be enough help.

BobcatAttack.com - For Fans of Ohio University Sports
Good news came to the Ohio football team Monday in finding that some of the team’s injuries were not as bad as feared. Defensive tackle Neal Huynh suffered a knee injury and cornerback Omar Leftwich injured his shoulder early in Saturday’s 17-10 victory against Kent State and did not return.

Huynh, who entered the game as the Bobcats’ leading tackler, was on crutches Saturday and it was feared he might have torn his anterior cruciate ligament, but an MRI revealed a less serious injury and Ohio coach Frank Solich said he would be out about four weeks.

It was known that Leftwich’s injury was not as serious, but there is no break and he might even be able play Saturday against Buffalo.

The ever popular Schadenfreude