Talking Bull: New divisional alignments if the B12 heads west?

Share All sharing options for: Talking Bull: New divisional alignments if the B12 heads west? 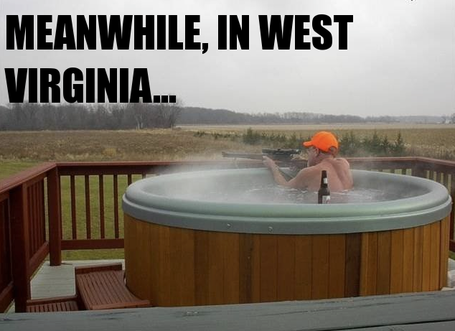 Big 12 Realignment: What's In Store If West Virginia Heads West? - SBNation.com
It appears that another program is about to leave the car crash that is the football portion of the Big East. What awaits West Virginia in the Big 12, and what happens to the other Big East remnants?

2011 Heisman Watch: Is It Andrew Luck Vs. Trent Richardson? - SBNation.com
Is the 2011 Heisman race Luck vs. Richardson at this point? Do the dynamic dual-threats (Wilson, Griffin, Robinson) still have a chance? What about the two quarterbacks who are about to hold every NCAA career record ever?

Week #9 MAC Football Picks 2011
Probably the toughest games to pick this week as both teams are better than their record indicates. Buffalo’s Chazz Anderson is really coming of age in his one brief season while Brandon Oliver is a solid RB. UB has lost two heartbreakers this year so you have to think something will go their way soon. Miami just can’t seem to get going this season and has had 14 turnovers this season which ranks 11 th of 13 in the league.

Game #8 Preview: Buffalo at Miami - Cincinnati Miami RedHawks | Examiner.com
Following a disheartening performance last week on the road against Toledo, Miami (2-5, 1-2) returns home to Oxford to face the Buffalo Bulls (2-6, 1-3) on Saturday for Homecoming. Miami is 59-39-4 all-time in homecoming games, and is 11-2 all-time against the Bulls. In last season's meeting, Miami was victorious by a 21-9 score.