Talking Bull: Attendance and playing with the Numbers

Share All sharing options for: Talking Bull: Attendance and playing with the Numbers 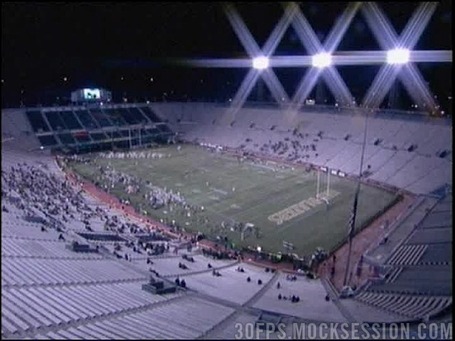 The reported attendance for last nights game between UAB an the UCF Knights was a little over eighty eight hundred. Now if that sounds bad, here is what it looked like!

Legion stadium has a maximum capacity of just over seventy thousand so this might, in fact, be eight thousand people but this, in a nutshell, is the problem with Thursday games.

You trade attendance for TV, but does it help to be on TV if your stands are empty?

EMU, worth a lot more than it looks?

When someone decided to evaluate college football programs as they would a business EMU would  be the most valuable program in the MAC.

That’s why I wanted to include the entire list of the Football Bowl Subdivision "FBS 100" on this blog.

If Boise state goes undefeated, and wins their BCS Game then the BigEast becomes and incredabally epensive proposition for them

Buffalo.com - What NIU thinkg of the Bulls
"So we’re going to have a game where we’re playing the second-leading rusher in the MAC [Branden Oliver], a QB that’s thrown for over 300 yards many times [Chazz Anderson], and a defense that has one of the most dynamic pass rushers in the country [Khalil Mack]. We’ve got our hands full, for sure, this week," Doeren said in his weekly press conference.

Week #8 MAC Football Picks 2011
UB is getting a very hot Huskie club coming to town just one week after the Bull’s dreadful performance in Philadelphia. NIU put up nearly 700 yards of offense last week and are priming up for their upcoming battle with Toledo for the MAC west title.

Buffalo to Face Huskies’ Stampede on Saturday - Sports - The Spectrum - University at Buffalo
The biggest problem facing the Bulls this week is the Michael Vick of college football – Northern Illinois quarterback Chandler Harnish. If the Bulls thought it was tough to stop a running game last week, just think how difficult it's going to be to stop the Huskies (4-3, 2-1 MAC). Harnish ranks fourth in the MAC…in rushing.

Bulls assistant makes huge rally off the field - UB Football - The Buffalo News
Don Patterson's life had sailed along in perfect harmony until the dentist looked in his mouth and suggested he see his physician immediately. There was more to this than the tooth infection Patterson theorized as his source of discomfort. The discoloration in his throat, the ghastly purple hue evident at first glance, indicated something far more sinister.