Share All sharing options for: The 3 point shooting Bonnies outlast the comeback Bulls 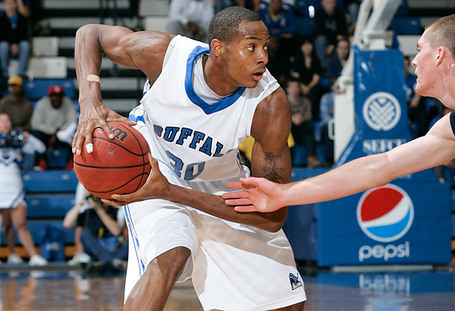 Reggie's jacket was off early and often in this contest. Flustered with officiating, his teams play, and the inconsistencies the young Bulls have been facing this season.

UB did not have a very good first half performance,  putting themselves in a 11 point hole going into half time.  Quite frankly, if it was not for a good performance by Byron Mulkey early on, this game would have been over early.

Mitchell Watt and Javon McRea were in early foul trouble, and this obviously lasted throughout the game.

UB came out of the locker room just as flat as they looked in the first half, but always slowly climbing back into games. They were down most of the half by double digits until the big push they made. With around 6 minutes left in the first half, UB started to surge, causing turnovers, playing suffocating defense, and looking like a legit power. Mulkey and Filson making some key shots down the stretch, and a couple of key players in foul trouble for St. Bonaventure. To climb back in this game showed true heart, and I'm very proud of my young bulls.

The Bonnies needed a long range two from their stud player Nicholson with 8 seconds left in order to put away the Bulls, who in turn almost hit a buzzer beater as Mulkey threw it up.