Share All sharing options for: So Long Seniors: Mike Marr

Over the next month or so Bull Run will be saying farewell to those Bulls who are moving on. This years graduating class could not have known the ride they were signing up for at what was then a hapless school. The pain of this season has to be somewhat offset by that championship ring they are leaving with. That, and our thanks as fans will have to do. 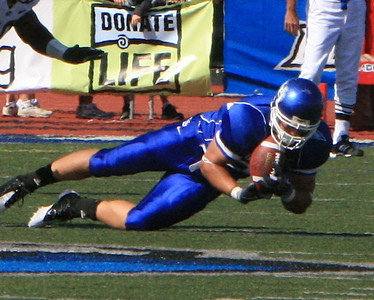 The Road to UB:

Despite a respectable football Career as a linebacker and tight end for Moravia Central High School Marr did not make the jump up to Division one.

Instead he went to Erie Community College where he was a part of the NJAA 2007 Championship team. During that season Marr Played in every game. Catching 10 passes for 140 yards and two touchdowns.

After finishing his career at ECC Marr walked onto the UB Football Team and red shirted the 2008 Championship Season. Marr retained his walk on status in 2009 despite seeing some game time action.

When Turner Gill left for Kansas Marr, along with several other walk-ons, were worried about their standing with the new coaching staff:

When I first came in I was at the bottom and worked my way up, Last year, Jesse was the starting tight end then it was Kyle [Brey] and then it was me. Then Kyle got hurt and I moved right in and played a lot last year behind Jesse. I've worked my butt off.  -- Marr to the Buffalo News

"It's a great day for a head football coach to be able to reward these young men for their efforts."