The Bull Run Inquisition: Over The Pylon

Share All sharing options for: The Bull Run Inquisition: Over The Pylon 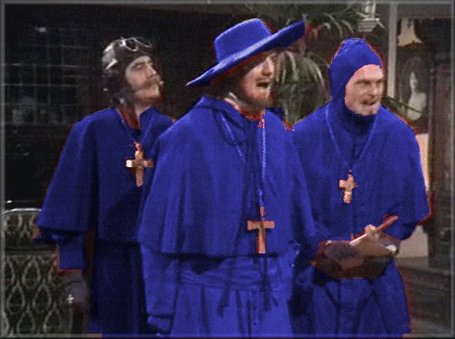 It's time to restart the Bull Run Inquisition. And this is one that is nearly two years in the making as Buffalo and Ball State finally sit down for a rematch. Whenever you have to talk Ball State you have to start with "Over the Pylon".

The blog kicked off during the summer of 08' and they rode a wave through threw regular season right to Detroit, that's when their seething hatred of all things Buffalo began. Despite a hatred that, if properly focused, could shatter entire worlds Alan volunteered to step into our interrogation chamber.

This week the chamber features just one loop of film:

After a few hours of this torture OTP offered up the following information.

Bull Run: Its been an awfully hard season for both teams. Usually in every bad season a blinded fan can find a turning point moment. I can honestly say that I don't think Buffalo has had one of those. Does smacking Akron down in overtime have the feeling of "turning point"

I wouldn't call beating a winless Akron team a "turning point" because it's hard to get exceptionally excited about a winless team you needed double overtime and a bit of luck to defeat. What I would call it though is a stepping stone. After a couple of heartbreaking losses, this team didn't chuck the season in the toilet, and that's refreshing. I would call this Friday's game against Buffalo a turning point, but not for this season. If the Cardinals can finish strong, defeat Buffalo and maybe defeat NIU then that builds a ton of momentum for offseason workouts, spring ball, and next season.

Bull Run: I don't know the specifics of Stan Parrish's contract but I have heard many cardinal fans talk about how you are "stuck" with him. How much leash does he get after this season?

The thing about Stan Parrish's contract is there are two remaining years on it, and the buyout is rumored to be in the neighborhood of around $600k. The sheer mathematics of the situation make a buy out impossible. BSU had to use Coach Hoke's buyout from San Diego State to upgrade the coaches' salaries and pay Coach Parrish what an actual football coach makes. Regardless of results, the only way Coach P isn't on the sideline for the remainder of his contract is if he retires or quits, which I can't imagine happening. As for his "leash", ultimately he doesn't have one because of those financial constraints. The fans can be pissed and angry, but unless they want to start passing a hat at homegames to try and raise some coin, we've got him for a while.

Bull Run: When the schedule came out this was a game that popped out as huge for me. After a healthy does of "fail" this season I am now a lot less enthusiastic about this game. Aside from a beatable opponent (something we can both say) is there any remaining fire on your side of the fence for this weeks match up?

From the fan's point of view, as well as the team's, I'd say this game is certainly important. For BSU, it's the chance to prove some of the vocal critics wrong. It's a chance for the young players like Keith Wenning and Jack Tomlinson to continue to prove themselves. It's a chance to leave this season on a high note, much the same way we were able to upset WMU last season. When a team's back is against the wall, they either fold or rally. Their performance last week says folding isn't what they've decided, so there is guarded optimism from the BSU faithful.

Bull Run: Was Lewis's show last week an aberration or is he finally getting back to 2008 form?

Quale has certainly been a mystery this season. Much of that has to do with the fact that the offensive line is nowhere near as experienced or talented as 2008, and those that have started have battled injuries for a good portion of the season. Quale also hasn't gotten near the touches that he was given in 2008, nor 2009 for that matter. Perhaps it's a coaching decision (an ill-informed one) or it could have considerably more to do with the fact that there are two other exceptionally talented tailbacks in the rotation in Eric Williams and Corey Sykes. What's sad is Quale is only 272 yards away from being the school's all-time leading rusher, and racking up 272 in two games is a tall order.

Bull Run:  If you were Buffalo's OC and constrained to the spread how would you hit Ball State's defense?

That's a hard question to answer, if only because at different points this season each of the areas of defense have excelled. The defensive line features Robert Eddins and Andrew Puthoff on the ends, and both are capable of pressuring a QB or stopping the run. The linebacking crew of Travis Freeman, Justin Cruz, and Davyd Jones are capable of covering and also capable of filling the running lanes and being disciplined on play fakes and misdirection. The one unit that has been consistent performers has been the secondary, led by Sean Baker at free safety. Baker is capable of coverage and viscous hitting. Whatever Buffalo does, they need to be aware of where #25 is at all times. The one area of concern that has been a constantly troublesome spot has been a mobile QB capable of breaking the pocket, scrambling, and making things happen. We've made more than a few QBs this season look like Denard Robinson, Jr., so that's something to pursue if Buffalo is able.

Bull Run: If you were Buffalo's DC how would you go after shutting down the Cardinals?

I think the more they can prey on Keith Wenning the better. A combination of pressure up front with disguising their coverage, not showing their blitzes, and forcing Wenning and the receivers to fit their passes into very small windows then they have a chance to rattle Wenning. He has shown a propensity to not be pinpoint, resulting in tipped balls, interceptions, and general negatives in the passing game. They also can't focus entirely on the pass, though, as the Cardinals' rushing attack is formidable. Whether it be the between the tackles rushing of Quale Lewis, the around the corner speed of Corey Sykes, or the hybrid of the two in Eric Williams, the Bulls need to force mistakes as BSU has been known to give the ball away at times this season.

Bull Run: Prediction for the game?

I think this is one of those games that any outcome wouldn't surprise me in the least. A BSU win by 24 would be great but not at all surprising. A Buffalo win by 24 would be the inverse of great and also not at all surprising, considering how both of these teams have looked awesome and equally awful at various times this season. When it comes down to it, I'll say the team that wins the turnover battle wins the ball game, and I'll go with BSU in a very close game, 27-21. *grabs Rosary, begins to pray*