Share All sharing options for: Time to hate: Ball State

Hate week went away after the Temple Debacle but I am back, energized, and ready to hate. And who do we have this week to hate? Oh Joy! Its Ball State! A team who's fans trashing of UB before, and surprisingly after, the MAC Championship game of 2008 makes hatred easy. 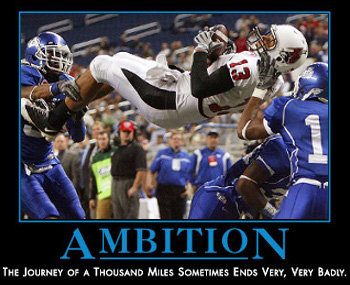 If those seem like the halcyon days to you imagine how it must feel to be a Ball State fan?

But enough about the numbers, let the hatred begin! What Follows if half fact, half fiction, and all hatred. If you cant tell what is what, well you probably went to Ball State.

The Economic Backbone of Muncie was created by a group of brothers trying to get out of a loan:

The men who founded Ball State and the business that would be a staple in Muncie for decades started their business with a loan of 200 dollars from their Uncle George Ball. The Ball Brothers gre tired of turning off the lights and pretended that nobody was home when good old uncle George came calling for his 200$.

The company prospered on the abundance of natural gas and lack of family trying to collect on a debt until 1998. When a decendent og George Ball found the IOU and started proceedings to collect, with interest. Pulling a page from their family play book Ball Glass pulled up steaks and moved to Colorado where they have designs on starting another "Ball State".

Muncie Indiana was the first Community picked apart by sociologist for it's "eccentricities":

Under the guise of a sociological study of middle America Robert and Helen Lynd went to Muncie to see what made this community tick. Of particular interest to Helen Lynd were the abnormal behaviors of the men of Muncie.

Her work led her to detail a theory of shame which finally hinges upon the clashing of different social or moral ‘values’ in specific places and times. She would use Muncie to highlight the trauma experienced by members of communities marginal to dominant culture.

Ball State was founded when industrialist took pity on the town:

Between 1899 and 1918 The good people of Muncie tried to get a school going in the Buildings which now house Ball State's administration offices. Twice Closed, three times acquired by other entities and renamed six times it seemed that "Middletown" would forever be led by a local high school.

Then the Ball Brothers started "Ball Teachers College" (Just soak in that name) because they felt like they were watching a kid wizz repeatedly on an electric fence.

After hitting an enrollment of 10,000 students and still being a massively under-qualified institute. Members of the Indiana General Assembly had the bright idea of re-branding what was effectively a trade school as a "University".

After they started to call Ball State a University the number of programs grew and academics improved.

The Practice of announcing your success before actually doing the job was copied by President George Bush when he declared Mission Accomplished!