Khalil Mack ran away with the Game ball in this weeks voting. Mack came in with just under 80% of the fan vote. This is the second time Mack won the fan game ball but this is by no means the only award for which he will have to make room. 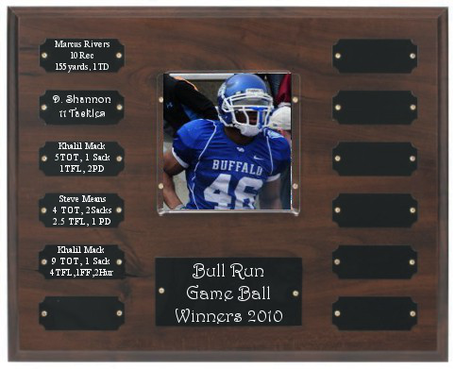 Davonte Shannon, who was a distant second this week continuities his climb in the UB Record Books:

The Davonte Shannon UB Record Countdown
The new, per game,  pace for Shannon to break the records are

Some single season records that look like they might be in shooting distance for UB Players this year:

Jerry Davis is on pace for 26 Touchdowns, if he holds that pace he would edge out Drew Willy's 2008 record. Unfortunately he is also on pace for 26 interceptions which would shatter the old record of 19 now held by three Bulls.

On defense Khalil Mack is on pace to get 19 tackles for loss which would put him at #3 all time.

Domonic Cook already has three forced fumbles which ties him for eighth all time and puts him on a pace to pass Anthony Scott for first all time.