This week hosted by Eagle Totem, Here are my answers

Eagle Totem:  What are your realistic best- and worst-case scenarios for the rest of your team's season?

Best Case would be taking out Miami, Akron, EMU, and either Ball State or Ohio to finish with six wins. I just don't see UB upsetting Temple or NIU with our offense playing as sloppy as they have been, but the defense should be enough to give us a crack at the later portion of our schedule.

I suppose if both Buffalo and Temple lose to NIU there is a *very* outside shot at Buffalo competing for the east. I don't see UB beating Temple, especially the way we have been playing but it is a home game. If the game goes the way it should, and Buffalo loses, seven wins and second place in the east is possible.

Worst Case Buffalo loses to nearly everyone, throw in a Loss to Akron or EMU. This, unfortunately is way more likely than my seven wins dream.

Eagle Totem: If you could pick a single down that's been played this year to give a different result, which play would you choose? Why that play? How would you like it to go?

Easily that would be the ill advised shovel pass against UCF, the game really turned on that. UConn and Baylor were blow outs but the Bull could have beaten UCF.

Of course I would have liked to see a different call but given the call that was sent in I would have like to see Davis eat the ball rather than put it right in the hands of a UCF lineman already sprinting in the direction of our endzone.

Eagle Totem: Which MAC team is better than their record? Which is worse? 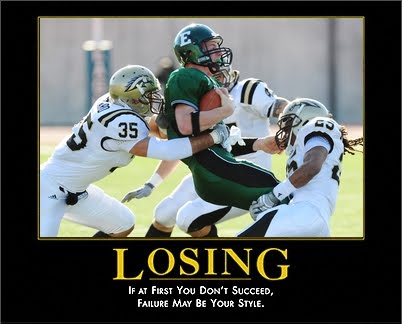 Well it never hurts to suck up to the guy hosting the round table so I'll go with EMU. I think they could have, and perhaps should have, beaten Army or Miami. That being said I still think they will finish the season 0-12 (Please G*d if the eagles only win one game this year let it not be against Buffalo).

Still Every time I think the Eagles are about to turn the Corner they fall back into being EMU. Right now their biggest fear should be WKU winning a game and catapulting Eastern Michigan to the position of longest active losing streak.

Eagle Totem What remaining game are you most looking forward to?

Last week I would have said Ohio, but seeing BSU dismantle the Chips has changed my tune. I've resigned myself to the fact it would take planetary alignment and a field of four leaf clovers for UB to beat either Temple or NIU so I have to settle for the third best team on our schedule. It looks like that is either Ohio or BSU.

We get the Bobcats on the road and BSU at home. Also at home are EMU and Miami so *if* UB can beat Ball State they should have at least five wins. Akron is on the road but they look hapless right now so that could make six, and like it or hate it six wins gets you a bowl.

Eagle Totem: Rank 'em, in whatever order and by whatever criterion you prefer.