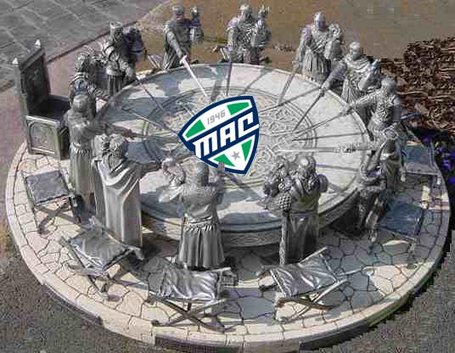 It's that time again, MAC Blogger roundtable. This week our therapist is "Over The Pylon".

OTP: After 6 games, we're halfway through the season or damn close if you've had a bye. Are you pleasantly surprised with your team's performance so far? Angrily apathetic about what you've seen? Right where they were expected to be? Give your team a mid-term grade.

Record wise UB is right where I thought they would be but I am still pretty pissed at the fact they are not doing a little better. The UCF game was very winnable were it not for the pick six.

The turnovers have to stop, you know its a bad sign when moving a true freshman to second on the depth chart and it makes news.

OTP: This weekend there's a bevy of MAC action. Taking your own game out of the equation, what game are you looking forward to? What game gives you the potential for the most information about what teams are for real and which teams are anything but?

Both are teams Buffalo will need to beat if they want any crack at six wins. BSU has been hard to peg all season long, One week the look solid and the next they get manhandled. Eastern Michigan is kind of a low water mark in the MAC. If they give BSU a run for their money I'll feel a little better about our chances at maybe sneaking in a bowl.

OTP: As it's Columbus Day week, what MAC coach has clearly not lived up to the adventurer spirit and should be shipped somewhere far and distant... for Queen and honor of course.

Stan Parrish. I know some supporters have been crowing that the Cards 'are better' but is that really saying much? I know 2009 was a season when he had to do a lot of rebuilding but they did have recruiting momentum (I think they had 18 verbals in August), 2010 should be going better than it is right now.

OTP: More on a national purview, with Alabama's loss the door is wide open for perhaps a non-automatic qualifying conference school from Boise, Idaho to shove their way into the national championship. Is this the year that the "little guy" finally earns the respect of the BCS conferences?

In all honesty I don't see Boise getting in unless, maybe, Nevada wins all bu the boise game, TCU is more likely to make it. Regardless of who makes it the worst case scenario is a NON-AQ team going and getting killed.

All that a non QA school losing in the national championship would do is to further allow those pig f&&^%$s at the BCS to claim it's an equable system with none of the 'pop'.