Share All sharing options for: Week One: Thoughs and Grades - Cupcake Tipping 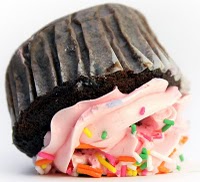 I said during the "Last Bull In" podcast that if UB lost this game something needed to be burned down. For a few minutes in the first half I was afraid that it might come to that.

I also said that I expected UB to struggle a bit out of the gate as they broke in their new look offense and defense against a real life, albeit FCS, foe for the very first time.

Both teams traded mistakes as the Bulls took 15 minutes to get into the groove of Coach Quinns offense. Rhode Island missed some key chances to put points on the board and once the Bulls finally hit their stride the Rams would not get any more chances.

In the end UB put up more than 400 yards of offense and four different receivers would get a touchdown pass. The rams had just one drive longer than 29 yards and were limited to 207.

I know this was only Davis's first real start (not one quarter of Zach Maynard 'Time out' relief) but still it was an FCS team.I expected more of him early. I am really struggling not to give him an A but the fact is while his passes were great they were not under pressure.

The few times he was under a real rush (screen plays) his passes were terrible, leading to his one pick. Either he will struggle under pressure (which he will see more of as the season goes on) or this was a first day jitters.

He did put up sexy numbers:

But that was due in no small part to some amazing catches by Rivers (No, I am not putting the wrong name in there). His passes in the first half were mostly off target, if only a little bit. Some real nice touch passes in the second half bring the score up.

From the looks of things I have to put away the "don't throw it to stone hands" meme that I had all warmed up for this season. Rivers was phenomenal he may have grown into the exact thing we needed to fill in for Roosevelt but we wont know for sure until we see this against some quality defenses. Still I think it's safe to call his outing a "career" day, hopefully it was the first of many.

Aside from just one drop in the first quarter Neutz also played a flawless game. Jackson and Young were also reliable targets.

It's not all their fault that UB did not manage 100 yards, Davis and the receivers got enough work to 'get the bugs out' but the backfield got just over half as much work as the passing game. What is their fault is the fumbles. UB's top two backs (Oliver and Thremilus) both put the ball on the ground. One of those fumbles was a hairs breath from going the other way for six.

Until he coughed it up Thermilus was having a great drive, he saw the ball sparingly after that and he didn't do much with it. Aside from Thermilus no back seemed to be comfortable running the ball.

Looked great in pass protection, but this was Rhode Island. The minus is for Peter Bittner's two "illegal man down field" penalties. Even though one one play there were at least two linemen down field Bitter is the senior so he gets the call.

The running game looked iffy and I did not see a ton of big holes, this worries me as RI is the weakest defensive line we see all year.

So nice pressure, and they did what a 3-4 line is supposed to do, they occupied enough of the five man line to let the linebackers do their job. Steven Means looked very nice on the end, enough to disrupt several pass plays.

Once or twice they let the play get outside of them but aside from that they played a very sound game. The plus is for Winters nearly killing their runningback and the general bad attitude they brought to the field.

The linebackers are an area of real talent and depth on this team and Quinn's new defense gives them the change to be the group that leads the defense.

The A is for the picks we did get, the minus is for the ones we should have gotten. It was a 'quiet' day for Shannon who had five tackles (one solo, four assist). The DB's were not too badly tested, pressure from the linebackers made the Rams quarterback erratic and off target.

Nothing special about our third unit this week. Punting was better than last season and returns seemed a bit better but kickoff coverage is still a six pack of awful!

So what do you think?