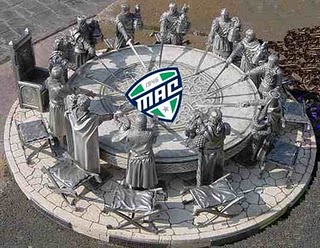 This weeks MAC Blogger Round Table is being hosted by "Fire Up Chip's", as per usual the host send out his questions early in the week and the participants post their answers on their blogs. Later in the week the Host will gather together the answers they like the most.


1). The MAC has looked weak so far against out-of-conference opponents. Is this shaping up to be a down year for the MAC?

Down year? This is looking to be another in a string of down years! At some point you have to stop looking at years like this as a down year and start looking for some light at the end of the Tunnel. Two MAC teams could have easily won their games (Bowling Green and EMU) and both found a way to lose, in a nutshell that is the past several years of MAC football.

2). Why don't our fans come to games? Whether it is Buffalo in a large city or Bowling Green off the side of a highway, our stadiums are generally...uninspired. Even after Central Michigan's GREATEST WIN OF ALL TIME against tormenting in-state rival MSU, Central Michigan's stadium was half full the next week against Alcorn State. Can anything be done to at least get on par with a Tulsa or ECU?

A lot of it is cultural, football is up there with Church once you get to the south. Each MAC institution has unique challenges that our sunbelt and conference USA brethren don't face. This week UB played the same night as the Bills and Buffalo is first and foremost a pro sports town. Many MAC schools have to deal powerful in state powerhouses (Ohio State, Michigan, ...) or professional teams.

As far as how some other schools fair, look at Troy who only drew 19K for their season opener. Troy's excuse, that Auburn was playing the same day.

3). People act like a win for Boise State is a win for the "little guy." Is Boise State really carrying water for the non-aq's anymore? It seems to me they are essentially a BCS program at this point in time.

Well they are still a non-aq so I still pull for them. Their athletics budget of about 25 million dollars is within shooting distance of many MAC Schools, and less than one (Temple). The MAC as a whole averages 21 Million so Boise faces the same challenges that any Non-AQ have to deal with, but they have handled them better.

4. The game of the week has to be Temple versus Central Michigan on Thursday night (ESPNU). Who ya' got in that match-up?

After watching Villinova run up and down the field on Temple for three quarters I have moved from Solid Temple to cautiously Temple. If the reason that Nova' was killing the Owls is because the wildcat then Temple can thank their lucky stars nobody in the MAC runs it. CMU's pro style plays right into temples hands, so I doubt well see the Chips drop more then 17. If Temples offensive problems were due to execution issues, or if Temple is not as solid as advertised CMU's defense might keep them in the game.

5. Which MAC QB is going to take the crown as "best of the conference" when the dust settles at the end of the season?

Right now I have to go with Alex Carder of Western Michigan. Of all the Quarterbacks who faced 'real' opposition Carder was easily the most solid passer in the MAC tlast week. Spencer Kieth might have a breakout year but until he faces a real defense it's impossible to know and too many youg quarterbacks played cupcakes this week.

6. Rank them FIRST to WORST.