How did our 2010 opponents do this week

Share All sharing options for: How did our 2010 opponents do this week

The Rams of Rhode Island butted head with the Rams of Fordham, and Fordham won.

Rhode Island's sole win last year came against Fordham (meaning that in every Rhode Island game last season a team named the Rams lost), coming up 2 yards short means Coach Trainer might just follow up his 1 and 10 season with an 0 and 11 season.

Does he look a little upset to you? Maybe thinking about changing his starter?

The Knights coughed up the ball five times. Among them was a pick six and a last minute fumble deep in enemy territory. That was enough for NC State to put away UCF 28-21.

Recap on the NC State Blog 'Backing the Pack', and 'Fan Reaction on Knights Notepad' 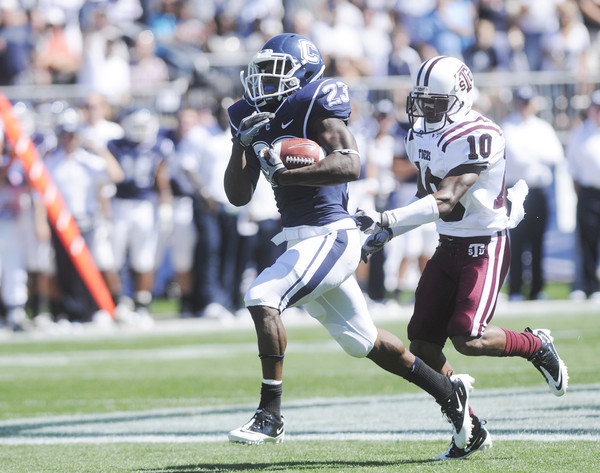 This game may have let the huskies work out any frustrations that the Michigan game left them with. It's as if the Huskies could do no wrong during a nearly perfect beat down (They did give up three points)

UConn travels to Temple this week with the hopes that they won't need a terrible last second call, or a monsoon, to beat the Owls this time around.

Recap from 'The UConn Blog'

Two weeks two hard losses for the Falcons. After spotting Tulsa a mess of points the Falcons started to storm back, getting within two scores and driving with five minutes left then they threw a pick.

If the Falcons had managed to keep Tulsa from living on a short filed this might have been a different game.

Next up for Bowling Green? "They Are Marshall"

Reaction from our friends over at Falcon Blog

NIU Came within a hair's breath of being the third MAC team to drop a game to an FCS foe this week. The Huskies are looking more and more like the second, if not third, ranked team in the west behind CMU and Toledo.

Next up for NIU? A grudge match against Illinois.

Roundup from Red and Black Attack 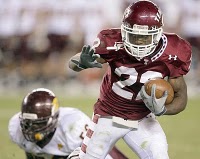 Talk about just surviving. Tied 10-10 Temple coughed the Ball up with about a minute left. All the Chips had to do was go 15 yards to get withing field goal range, all they did was get sacked, fumble, and recover for at least a ten yard loss.


St. Bernard is yet to be a factor, at all, this year. With games against UConn and Penn State I think its safe to put away the "Hunt for the Heisman" bumper stickers.

Reaction from The Owl's Nest

Miami and EMU played a better game than Temple and CMU. Not just the scoring, but it was way cleaner. EMU pulled out a flea flicker early and fought tooth and nail to overcome... well to overcome being EMU.

Next up? Home against their sworn blood enemies, central Michigan (also the last team they beat).

Ohhhh- Hio.. How could you? This was the year! This was the Year Temple and Ohio would provide two teams that would run their cross conference draw and establish the East as the better division!

The Bobcats fell apart against Toledo and the Rockets made them pay for it.

Next up? Ohio State... I promise win this one and all is forgiven!

They were partying like it was 1699 at Liberty (no dancing, no ankles showing). And they had good reason. Ball State who looked marginal against SEMO in the first half of last weeks game gave the Flames.

Now BSU might have to make a change, were I them I would be looking at coaching, but mid season you're more likely to see a new QB... Yea because Stan has not tried shuffling around Quarterbacks before.

Next up? Purdon't where if Parish manages a miracle all may be forgiven.

Needless to say, Over The Pylon was not happy

EMU how close can you get, what in the hell goes in in that little town which pisses off the fates? you are now on a 14 game skid and have chucked away your best chances for a win this year.

I'll say this, the eagles *look* better than BSU so they have a shot there. Akron did literally everything they could do to lose this game, short of forfeiting!

Tie game with a few minutes left Akron drives down to the four, and they fumble. Then the force a three and out, drive the ball to the red zone and miss a field goal. Then in OT they put together a nice scoring drive and miss the extra point. Gardner Webb answers in OT with a touchdown *and* extra point.

How can a school with the best soccer team in the nation  not have a guy on the roster who can hit a chip shot field goal or an extra point?