Right after the game a poll went up on Bull Run looking for the game Ball Recipient. The Winner with 60% of the vote (Double anyone else) is Marcus Rivers:


When fans asked who would fill in the gaping whole left by Naaman Roosevelt Rivers ran a flag rout yell "I Will" the entire time. Either last years criticism (including mine) was way over blown or Rivers and Coach Taylor have worked hard to get him past whatever was going on.

Alex Neutz could have easily been on the Ballot but between Davis and Rivers he would have just been watering down the pool of votes. The Freshman will have his day given the show he put on.

On Defense Winters got the majority of the recognition, though Means "sack and strip" might have been play that lit a fire under the whole team. 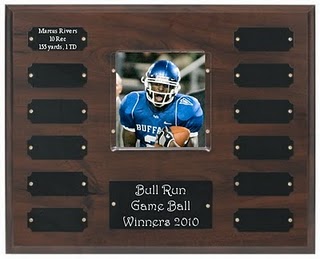