UB Hockey pulls in another recruit

Share All sharing options for: UB Hockey pulls in another recruit 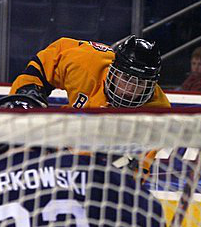 
After his time in Canada Krug was taken on by DIII  Buff State where he was red shirted his freshman year. This latest edition bolsters an already strong class:

Big kid with a good scoring touch, This is going to be one of our strongest class in recent years. -- Coach Sal Valvo