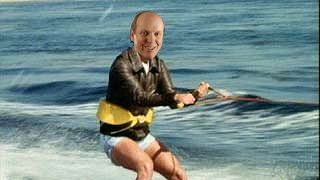 One of the curiosities surrounding MAC media day was the presence of Bill Hancock. Many in the MAC fan world were some what amused, or bemused that a figure head for the BCS, arguably one of the most negative influences on non automatic qualifiers, would be given a seat of honor at the MAC's annual meeting.

The best rant, and yes rants are both valued and needed if one is to stay sane came from Alan at over the pylon:

What’s Hancock going to say? I can only hope he’s honest and gives a luncheon address about knowing your place in life and never reaching too far out of your ability, since that’s basically the message the BCS tells the MAC each and every year. -- Overthepylon.net

It would have been sweet if, as Alan said, Hancock had been brutally honest with the MAC, hell it would have been tolerable if he had even told some white lies but there were lines in this speech which squatted, and defecated on reality, and the MAC.

There were several lines which made this a shark jump the likes of which a MAC Media day may never see again:
This is like telling someone convicted of a crime in 2000 that under the new law they would not have been jailed. Do you really think that's some kind of consolation? Miami was basically robbed, but at least they can look back on that season and say "hey if that happened today"...

The point is it's broken today, the fact that the BCS formula includes weights from the AP and coaches polls means the MAC is starting from behind each and every year. A team should not have to be a top 15 team for three years to crack a BCS bowl.
This statement, in and of itself, is so obscene that I almost black boxed it. Boise owes the BCS? The BCS makes it possible for teams to do what Boise did?

Boise has the best record in college football over the past five years, at least. They have been in two BCS bowls and won them both. In 2008 they were undefeated, ranked in the top ten, and kicked into a non BCS bowl because the affirmative action spot was taken up by Utah (who themselves were boned out of the title game).

Then to top it off when Boise does get a crack last year not only are they matched up with the only other non QA team in the BCS picture (to protect the BCS princesses) they are paid a fraction of what the AQ teams get for their participation.

Boise didn't land on the BCS, the BCS landed on Boise!
This is an instance where someone tries to 're-frame' the debate by changing the terminology. While the preferred nomenclature of the MAC, WAC, MWC, CUSA, and SBC is 'Non-AQ Conferences' they are effectively not a part of the BCS (aside from small portion 'hush money' that the BCS throws at these conferences.